High school senior Josy Grant already had plenty on her plate before she found the magic puppet theater her murdered sister left behind. Despite Josy’s grief, the responsibility of taking care of her family falls to her, and being queer doesn’t make dealing with school any easier. Things only get worse when sexy new girl Nicky tells Josy her sister died at the hands of a mysterious figure from the Faerie Realm called the Woodcutter, and if they can’t stop him, Josy and her remaining sister will be next.

They have just days before the Woodcutter strikes again on the autumn equinox, so Josy follows Nicky into the Faerie Realm to hunt him. Along the way, she discovers Fey gifts of her own and answers to the questions that have driven the Grant family apart. Nothing comes for free when dealing with Fey, though, and those gifts and answers might come at a terrible price. 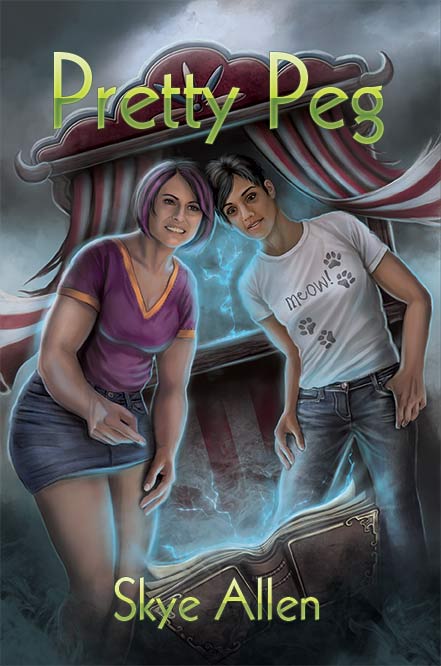 I ordered a café au lait and settled in at a rickety table next to the palm tree on the patio. The place to sit at Fern’s Bleedingheart Lounge, café by day, bar by night, was out back. You could watch the outfits coming in the door, and the passion vine-covered chain-link fence kept out the wind. I breathed in sweet steam and stacked my homework in dessert order, English last.

“Josephine Grant.” I looked up. Leaning against my palm tree, in a David Bowie T-shirt and carpenter pants cut off at the knees, was Nicky. The girl from school. She had a halo. I looked more carefully and realized there were white Christmas lights in the tree behind her, making her curly brown hair glow.

I’d forgotten about my hair. I touched it to remind myself what was different. Pink, that was it. “Thanks, it’s, uh, actually my natural color. I’m letting it grow in.”

“So do I get you?” Her dark eyes crinkled.

She pointed a silver-ringed finger at my bag, where the drama club flyer was sticking out. “For senior service at the theater. Don’t tell me you got all beguiled by tutoring or something worthy since lunch.” She hooked the other chair with her foot and dropped into it.

“Oh right. I actually am a tutor, but yeah.” I unfolded the pink flyer over my knees and discovered the paper horse from the puppet theater tucked into it. I must have put it in my bag when I left the house. Weird. I didn’t remember that.

Nicky snatched the horse out of my lap with a gasp like she’d been stabbed with a safety pin. “So you know.” Her voice didn’t rise, but it rang out. A couple at the next table jerked their heads up from their laptops.

“Know what?” I didn’t like how she’d just grabbed it like that. My hands went toward hers, but I stopped before I touched her. Could she tell? About me? That I liked girls?

It didn’t matter. Out of my league. I swallowed and hoped my face wasn’t as red as it felt.

She turned the horse over, tracing the little strip of gold tape on the base. “Pretty Peg,” she murmured. Her features were drawn inward, like she’d forgotten I was there. A ripple went through the horse’s metallic ribbon mane, and its legs stirred. I thought it was the wind, and I slapped my hand down on my papers on the cool metal table, but the air was still and heavy with the smell from the fire pit next door at Vulcan.

She seemed to shake herself back to reality. She met my eyes. “So you know all about it. We only have a few days.” Her voice was firm, matter-of-fact.

She must be off her meds or something.“Uh, I found this puppet theater last night in my garage. My sister made it. That’s where that horse came from. I don’t know what you’re talking about.”

“Not the first.” She said it to her hands, still stroking the horse’s blue spine. Then to me, in a clear voice: “You really don’t? Know about the toy theater?”

“Okay. This is so not graceful. Let me start at the top. You see, I already know you. Your family. I knew your sister Margaret.”

I just stared at her.You know my whole family? Something about the calm in her voice stirred me into a panic. I dropped my hands into my lap, one hot from my coffee, one cold. I looked at her, her face pleading, dense eyebrows drawn together over brown eyes that looked bronze in the sun. Her T-shirt collar was ragged against the smooth V where her collarbones met. The skin there was darker. I averted my eyes so I couldn’t get caught staring.

Nicky sat up straight then, nodded with her eyes locked on mine, balanced the horse upright on her palm. Blew out air through her plump lips. David Bowie rose and fell. “I barely know you, not really. I know you don’t know me. But I have to tell you something. You’re not going to believe it, but you have to believe it.”

Margaret was in the CIA. She’s still alive in a cave somewhere in Pakistan. She was really a man.

“Okay.” I slurped my drink and made a go-on gesture with my free hand. “Talk.”

She began, “What you know about your sister’s life and her death, that’s not the full story. There is a—it’s hard to explain. Another world beside the one you know. There are creatures you can’t imagine, tastes that can haunt you until you’re hungry forever.” Her voice drifted off, and her long fingers drew restless circles in a patch of spilled sugar.

“Margaret was killed in Afghanistan while she was working with Doctors Without Borders. In the spring.” Saying “in the spring” made it easier on whoever I talked to. If I said “on March 20, 2012, five months and six days ago, on the road near her office, after curfew.” I usually got a follow-up lecture about prescription medication or the five stages of grief. I was doing fine on my own. I missed Margaret, but I had my hands full taking care of Mom.

Besides, I didn’t want to start getting deep into my own feelings. That raw egg could break at any time.

Nicky shifted in her chair and met my eyes. She clasped her hands together on the table and said, “I’m really sorry to take you by surprise with this. Your sister was loved, you can’t imagine. But that’s not exactly what happened to her.”

“So she was up in some kind of rave scene? Like drugs?” My heroic sister was a drug addict. It made a twisted kind of sense: look at Mom’s deep and abiding relationship with prescription painkillers.

Nicky was laughing. “Oh, there are folk who would not be flattered by that. No.” She drew in a long breath through her wide nostrils. “Did Pretty Peg—did Margaret ever talk to you about magic?”

“Magic. Nope.” I was annoyed. This conversation was going in a sales-pitch direction that didn’t make me comfortable. I hoped she wasn’t going to ask me to go to the Wiccan bookstore or accept Jesus into my heart.

“Your sister was—hurt when she was a child. By someone close to her.” She looked at me for confirmation, and I nodded. I was pretty clear on what she was talking about. It was the big family deal, the other subject we didn’t discuss because it made Mom cry. When he was sixteen and she was twelve, Robert molested Margaret. That was why he and my dad moved out. Mom and Dad decided it was best to isolate him from the rest of us instead of putting him into the system. They weren’t technically divorced, but you couldn’t deny that our family was broken.

Nicky went on: “She escaped into a kind of magical place—well, the whole world has magic. She escaped to our world. And the Fair Folk came to love her. Oh, I knew this would be hard to explain.”

“Fair folk? You mean like carnies?” My mind showed me a movie of Margaret with a trucker’s hat and a smoker’s cough, selling tickets to a rickety roller coaster. No way.

She kept talking as if I hadn’t interrupted. “And she loved them too, but she got caught up in some trouble she never should have been part of.” Now she met my eyes with her wide round ones. “And she died.”

I was getting angry. “Look, Margaret got killed by some random guy. He hasn’t been caught. They did think it could be an insurgent, but it could just as easily have been some psycho. They have those everywhere. A lot of people are willing to believe something like that could only happen in a place like Kabul, but there’ve been close to a hundred murders so far this year in Oakland alone, not to mention all the—”

She cut me off. “She was killed by the Woodcutter. An enemy of the Summer Folk.” She passed a silver-ringed hand across her mouth when she looked at the confusion that must have been on my face. “My people. You would call them fairies.”

Oh. She’s messing with me. That’s what this is.Furious tears blurred my eyes, and I tilted my head back so she wouldn’t see. I said to the palm leaves over my head, “Okay. I’m going home.” When I was sure I wasn’t going to really cry, I started pulling my books together, not looking at Nicky. I added, “So that whole drama club thing was fake?”

“I confess I thought if I could get you to the theater, I wouldn’t have quite so much to explain. I shouldn’t have pretended. Please. Listen. I came here to help.” She held down my spiral notebook as I tried to slide it toward me.

“You actually do, and you don’t know you do, and that makes it worse and more dangerous. Just let me explain.” The steely note in her voice made me stop moving and watch her face.

“I’ll buy that you knew my sister, or you know something about her, or whatever, but she’s gone. Leave her alone.” I stood up.

“Meet me at the theater after school tomorrow, and I can show you what I’m talking about.” She held my gaze with brown dog eyes, liquid and too beautiful to be wasted on a mean crazy person.

I looked away. “Oh, too bad. Tuesday’s actually my support group for people who believe in unicorns.”

“You think the dolls in the toy theater are being moved by Pretty Peg.”

My mind went swimmy as I worked that out. I hadn’t told anyone besides Laura about the puppet theater.

But yes, that was what I secretly half suspected, even though I knew it was impossible. That my dead sister was somehow talking to me.

“How do you know about that?” I asked.

“Just come tomorrow. Come and I’ll show you. You do need our help.” Her voice was pleading. She stepped in closer, and I smelled cinnamon.

“Protect me from what exactly?” I slung my bag across my chest.

She took a breath and pierced me with a look. “Not just you. You were right about one thing. The Woodcutter was never caught. He’s looking for you and your sister Laura.”

You can find Skye Allen online in the following places: