Today I’m pleased to welcome Jeff Gunhus to Off the Page chatting about making the switch from MG to adult. 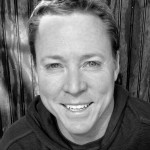 Jeff Gunhus is the author of the Middle Grade/YA series The Templar Chronicles. The first book, Jack Templar Monster Hunter, was written in an effort to get his reluctant reader eleven-year old son excited about reading. It worked and a new series was born. The book is a Book Of The Year Finalist for Foreword Reviews and a Finalist for the Next Generation Indie Book Award. Book #2, Jack Templar and the Monster Hunter Academy was released April 2013. Night Chill is his first book for adults. As a father of five, he leads an active lifestyle in Maryland by trying to constantly keep up with his kids. In rare moments of quiet, he can be found in the back of the City Dock Cafe in Annapolis working on his next novel.

Top 5 Differences Between Writing for Children and Adults

1) Appropriateness. Stephen King in his book On Writing encourages writers to never hold back in the name of correctness or propriety. He wants to let it all hang out because that’s reality. Writing for adults allows for that freedom. With middle graders, the filter has to be on. However, I might push the envelope a little on this issue. I think kids are smarter and can handle more than some might think.

2) Intensity. People think my Jack Templar books are intense. Night Chill freaked me out writing it…and I knew what was going to happen.

3) Language choice. I enjoy pushing the envelope in my MG/YA series about Jack Templar Monster Hunter. While the target age is 8-12, I don’t shy away from words that readers may need to look up in a dictionary. I find extending vocabulary to be an important part of reading and if I can wrap big words in a cool story about monsters, all the better. Adults tend to use swear words in the real world, so not using them feels false to me. Watch out for f-bombs.

4) Message. Readers enjoy what they can relate to. Kids would find it hard to relate to Night Chill’s Jack as he battles grown-up demons of being a good husband, father and provider. These are universal themes for adults though and grounds the supernatural aspects of the story.

5) Gore. There’s a balance between what’s fun for kids and what’s nightmare-inducing. I’m not a slasher-movie kind of guy and I don’t like gratuitous violence or gore, but kicking it up a couple of notches for Night Chill was a blast. My favorite thing was my own father admitting the book gave him nightmares. Nice.

Top 5 Similarities Between Writing for Children and Adults

1) Characters count. No matter the audience, the plot only holds attention if the reader cares about the characters.

2) Everyone loves a mystery. I loved books as a kid that ended chapters on cliffhangers. I’d always just do one more chapter. I don’t think that ever gets old.

3) Be real. Even though both books have strong supernatural elements, they are grounded in a real world with real rules.

4) Villains are just as important as heroes. Even though we often think of the super-villain in kid’s books as a caricature, kids are smarter than that. Both require layered villains with strong backstories to make them believable.

5) Readers are smart. Kids and adults will smell a fake a mile away. You have to be honest with the material and tell it like it is. If you shy away from that, readers will walk away. 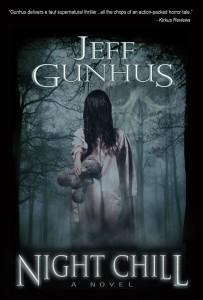 Emotionally scarred from a car accident in which a little girl was killed, Jack Tremont moves his family from Southern California to Prescott City in the quiet mountains of Western Maryland. At first, the small town appears to be the perfect place to reconnect with his family and to cure his troubled conscience, but Jack soon discovers he has left one nightmare only to walk into another. When a stranger who has been struck by lightning dies in Jack’s arms, a child’s voice comes from the man’s smoldering body to issue a warning: They’re coming for your little girl, Jack. . . you better run. Take your family and run. The warning turns prophetic when a local cult targets Jack’s five year-old daughter Sarah and Jack finds himself in a fight against dark, supernatural forces that he cannot begin to understand. With the help of a mysterious Native American, Jack uncovers more than just a conspiracy that extends into the small community, but an ancient mystery larger than anything he could have imagined. Suddenly, he’s not only fighting for his family, but also to stop a devastating evil from escaping into the world. Above all, he must rush against the clock to save his little girl.