***This is a New Adult book. Due to sexual content and some graphic language this book is recommended for young adults. Mature readers only. 18+ recommended.***

Life or Death? Not many people would choose death. But what if death chooses you? What if death doesn’t mean the end of your life, but the beginning?

And Charming is the best Escort the Grim Reaper has ever had.

But when you piss off the Reaper, being the best doesn’t matter. So Charming is assigned a Target who is practically impossible to kill. He knows the Reaper hopes he fails—that he’s counting on it. So Charming vows to prove him wrong. He vows to make the kill.

But someone else vows to get in his way. Someone with a big mouth, a sugar habit, and blond hair. Someone who makes his heart start beating again.

And so Charming is left holding more than one person’s fate in the palm of his hand. He thought the choice would be easy, that there really wasn’t a question at all. 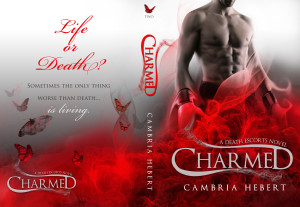 About the Author:
Cambria Hebert is the author of the young adult paranormal Heven and Hell series, the new adult Death Escorts series, and the new adult Take it Off series. She loves a caramel latte, hates math and is afraid of chickens (yes, chickens). She went to college for a bachelor’s degree, couldn’t pick a major, and ended up with a degree in cosmetology. So rest assured her characters will always have good hair. She currently lives in North Carolina with her husband and children (both human and furry) where she is plotting her next book. You can find out more about Cambria and her work by visiting http://www.cambriahebert.com