On the Other Side of the Window – Diversity in YA

Today I’m pleased to welcome Marieke Nijkamp to Off the Page chatting about why she created the fantastic blog DiversifYA. 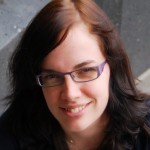 Marieke (pronounced Mah-ree-ka) is a YA writer, professional dreamer, and proud-to-be geek.

She wants to grow up to be a time traveler. In preparation of that, she spends way too much time watching Doctor Who and searching for stray TARDISes. She holds degrees in philosophy, history, and medieval studies, and loves to learn new languages. She suffers from Wanderlust, loves anything to do with theaters, and is constantly on the lookout for factoids to add to her collection of pointless information.

In the midnight hours of the day Marieke is a storyteller, and all her stories – ranging from literary to fantasy – have a sprinkling of magic to them. Whether it’s dark contemporary, epic fantasy, or magic realism, she loves to write stories that bend the line between reality and imagination. Preferably in a dark and twisted kind of way, but always drowning in hope.

On the Other Side of the Window

And growing up, some of her favorite books were Enid Blyton’s classic children’s series THE FAMOUS FIVE. In it, four children and their dog go on adventures. They drink ginger beer. They have their own private island with secret passages and old ruins. They eat ALL THE TIME. And one of the main characters was a very stereotypical tomboy called Georgina. Or, as she preferred to be called, George. George is eleven, hotheaded, loyal, stubborn, courageous, wears boy clothes, prefers to be called “Master” instead of “Miss”, and absolutely refuses to do any girly things (as opposed to her prim cousin Anne). In short, I wanted to be her. And sometimes still do. As far as I’m concerned, she is one of the finest characters in classic children’s literature.

Some dozen or so years later, I first read ANNIE ON MY MIND, a wonderful, wonderful YA novel about two girls falling in love with each other and the challenges they face together. (If you haven’t read it yet, please pick up a copy.)

Between George and Annie, all those years later, there were scarcely few characters I identified with. They were too able-bodied and too neurotypical for me to feel like I belonged in their stories. Maybe as a sidekick or the girl next door, but never as the star. And in these particular examples, they were also too straight. (Though if George is actually gay or, in fact, genderqueer remains a mystery.)

And I promise you, there is nothing more gut-wrenching than knowing all the stories you read, all the stories you *love*, are about “others”. Or in fact, to those stories you *are* the “other”. You are different, not according to the norm, an issue, a topic–or in fact, don’t exist at all. Forget for a moment that the world reflected in stories is far more homogeneous than the one we live in. We are the ones on the other side of the window, looking in.

These last few years, those windows have started to crack, but the cracks are few and far between. These last few years, I’ve talked to a lot of people about diversity in literature (MG, YA, fantasy and speculative fiction, and more). And often times I hear the same thing: that it’s scary to write diversity, especially when you don’t know what it’s like. Forget for a moment that we are all people and that’s a pretty big common denominator. They are on the other side of “our” window, too.

And it can seem very hard to reach out–even if that’s often not the case. It’s one step and one fragment at the time. Which is why I created DiversifYA. DiversifYA is meant as an inclusive community where people share experiences, in the hope that all of us who write will realize the world is much bigger than our little patch of earth. That we are diversity, and that one day stories will no longer be for us or them, cut-off from “others”. That one day, stories will simply be ours, all of us.

What kind of diversity would you like to see in YA? What do you think is most lacking?

This entry was posted in Blog, LGBT, Reading and tagged DiversifYA, diversity, LGBT, Pride Month, YA. Bookmark the permalink.