As promised, today I’m featuring one of my favourite LGBT movies of all time as part of Pride month celebrations. It’s not a very well known film and it features a bunch of relatively unknown actors but it gets across a powerful message with a great deal of humour, which is why I love it. 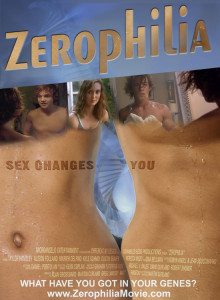 In this provocative teen comedy, Luke, a young man insecure about his masculinity discovers he’s a Zerophiliac, with the ability to change sex at will. Join Luke as he journeys into the extraordinary world of Zerophilia where so many crazy questions arise, only one question matters: “Whom do you love?”

This blurb is actually quite misleading. Luke isn’t insecure in his masculinity until his recently post-pubescent body starts becoming more feminine as his sexual desires become increasingly intense. The speculative fiction element proposes that Luke has a certain extra chromosome, which doesn’t allow him to change sex at will, but rather to spontaneously switch gender after climax. This makes for a few rather amusing scenarios, as Luke so aptly puts it:

“I make out with a girl, I start turning into one. You’ve gotta admit that’s a little weird.”

While the science in this film is questionable at best, I absolutely love the idea of spontaneous gender-swapping. I’ve always felt a little cheated having been born into a girl’s body without been given the choice. I’d love to be able to able to switch between being a boy and girl. Of course this situation gets more complicated for Luke as he starts falling in love with a girl… even though he sometimes finds himself more physically attracted to her brother.

I’d like to leave you with another favourite quote from the movie, which not only sums up the gist of this story, but also my own personal philosophy when it comes to identity:

Michelle: “There’s no supposed to be anything. You just are.”

Have you seen Zerophilia? Can you recommend any other good LGBT films?