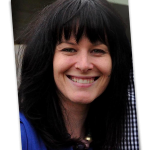 If Jessica Bell could choose only one creative mentor, she’d give the role to Euterpe, the Greek muse of music and lyrics. This is not only because she currently resides in Athens, Greece, but because of her life as a thirty-something Australian-native contemporary fiction author, poet and singer/songwriter/guitarist, whose literary inspiration often stems from songs she’s written. Jessica is the Co-Publishing Editor of Vine Leaves Literary Journal and annually runs the Homeric Writers’ Retreat & Workshop on the Greek island of Ithaca. For more information, please visit her website. 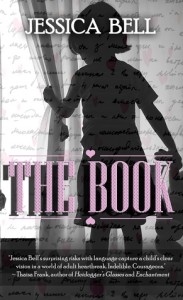 If there was one thing in this world you wished you could hold in your hand, what would it be? The world bets it would be The Book.

“Oh, Bonnie, darling, there’s a woman here to pick you up.”

Everything in the torlet goes on pause.

I look at the roof, wondering who it could be. Maybe it’s Mary. She’s never comed to pick me up before.

“Is it Mary?” That’s me asking, not Mrs Haydon. I feel much better now. It must be her. I love Mary. She’s not as old as my mummy, but she’s not young like me either. I think she’s somewhere in the middle. It’s fun because sometimes she plays stuff that I like. But sometimes she gets weird and tries to act like a grownup in front of my daddy. I play on my own when that happens. She wears bright red lipstick a lot and has frizzy yellow hair. She is a bit fat and squishy and smells like musk sticks. I like her hugs.

I heard Mummy saying to Daddy one day that when people sawed her and Mary together in the street, that lesbians would try to pick them up. I’m glad Mummy likes Mary. But why did that made my Ted go all upset? And where were the bodies going to take them? Did they have a blue Ute like my Ted? Maybe I should get Mummy to tell me the story. My Ted’s always in a hurry, and he sometimes drives too fast. But sometimes it’s fun. I like to lie on my back in the back bit of the Ute and look at the clouds and think that I’m in an airplane without any roof.

“The lady says that Mummy got held up at the fruit shop. Does that sound right to you?” That’s Mrs Haydon again. She does a funny hiccup.

I think she hearded me nod.

“Okay, then. I’ll go look for some clean pants and then I’ll collect your things and take you to her, okay?” She waits a second for me to say sumfing. I can hear her turn on her foot and wait like the pause button makes bodies wait in the VCR.

“Okay,” I whisper, feeling Mr Stomach doing dances. I think Mary picking me up means that I don’t have to go home and watch my mummy pretend she hasn’t been crying all alone in the kitchen, while my Ted lockted himself in his study room pretending to be smart.

Sometimes my Ted takes me to the fruit shop, and he buys me stuffed potatoes for dinner and Violet Crumble for dessert. But it gets boring sometimes. Mummy and my Ted look at me through the silent glass window of the office, with stupid smiles. I know they just want to make sure I don’t go make holes in the chopped up watermelon pieces. I did it a few times. My Ted yelleded rool loud.

Mrs Haydon comes back. I unlock the door, my legs going all shaking from the feelings. She has a pair of blue undies with robots on them. Boy knickers. Eew! She nods at the floor. I lift my feet out of the holes, making hard to not tumble over.

Mrs Haydon helps me get cleaned up. She washes my undies in the sink, making sure she doesn’t touch my stuff, then dries them a under the electric hand machine and puts them into a plastic bag for me to take back home.

“Here you are, Bonnie. Good as gold.” She gives me the plastic bag, opens my school bag and moves her head to say invisible words. I think she wants me to put it inside the bag. But I don’t want to keep them. If I keep the undies, I have to tell Mummy what I done. But I can’t tell Mummy what I done because I have to be a grownup. I have to be able to take care of myself. Soon Mummy won’t be able to take care of me anymore. I sawed her once, come home, and speak funny, and then fall over and go to sleep. She was still there when I gotted up in the morning. There was wet stuff on the floor next to her bed and it smelled like fish fingers.

I just spewded up in my bag.

“Oh dear.” That’s Mrs Haydon again. She stands up and wipes her forehead with some paper towel. “You must have a stomach bug, my dear. Your accident couldn’t have been helped, I’m sure. Let’s get this cleaned up and you safely home to bed. Hmm? The lady outside will make sure you get home to bed? Won’t she?”

I nod. Maybe my mummy will sit with me now, instead of hiding in her room and writing in that book. Most of the time she just looks at that book and cries. But last night she wrote in it for ages and gave it some flowers.

This entry was posted in Blog, Reading and tagged contemporary, giveaway, issue-driven, Jessica Bell, The Book. Bookmark the permalink.