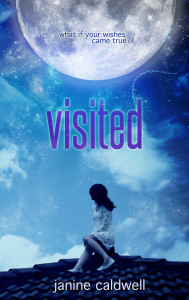 Blurb: Seventeen-year-old Joanna Murphy has lost faith in her life. Vying for her mom’s attention, she’s resentful of her stepdad’s intrusion to their family. Her best friend, Tommy, has no clue she’s in love with him as he dates girl after girl without noticing how it tortures her. The final kicker, though, is God’s sick joke to make her freakishly tall when everyone knows boys prefer petite girls.

Then in a bizarre accident Joanna meets James, a breathtaking teen who appears to her after an unusual falling star sighting. Suddenly, her dream for an alien encounter becomes all too real. But when she finds her life has been made unrecognizable, she’s forced into an explosive study of the original design for her life that just may have her regretting every wish she ever made.

*I received this book for honest review as part of an Xpresso Reads blog tour.

The gorgeous cover and intriguing blurb immediately made me want to read Visited. As a tween, I was addicted to the TV series Roswell and ever since then, I’ve had a soft spot for aliens-are-among-us type stories so I really thought I’d love this one.

When I think aliens, I think science fiction and I expected science fiction when I started Visited, but this is really more fantasy or even paranormal than it is science fiction. At first, I thought James the alien could’ve been played by James the ‘insert were-creature of your choice’ and the twist about who he was in the end was a little disappointing as I was really hoping the story would take a more sci-fi turn.

I think this story has a good premise that is, at times, let down by the execution. The dialogue was a little stilted and I wasn’t always ready to believe that teens would speak or interact as described in the book. The theme is obvious, perhaps a little too obvious becoming borderline preachy that might be better suited to younger readers, but which I found a little annoying.

I struggled to connect with Joanna. I’m a short girl who never really enjoyed ball sports so I didn’t feel like I had a lot in common with Joanna and some of the physical appearance comments just irritated me because they didn’t ring true for me – one of those short, barely 5’3 girls.

My favourite character was Tommy, despite some of his more obvious faults. While I found James intriguing at first, he went from mysterious to creepy pretty quickly especially with regard to his supposed age and the reveal about who he is didn’t really lighten the creep factor for me. And Aidan, more of him please. I’m a sucker for the villain! I’m not a fan of the Twilight love story or love triangle and aspects of this novel just seemed a little too similar to me, although the ending did make that all better by being surprisingly and pleasant different from what I expected.

Overall, I thought this book had an interesting premise that will appeal to younger readers and might fit well on the Christian fiction shelf, but it didn’t blow me away. Visited gets 3 ink splats from me.