Today I’m pleased to welcome Dominica Morgan to Off the Page chatting about her new pirate novel Adrift. 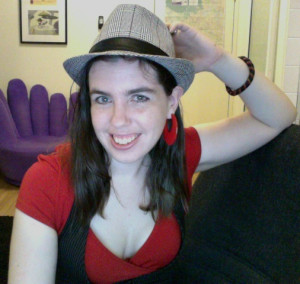 Though born and raised in Western Australia, Dominica currently lives in Kuala Lumpur, Malaysia, with her husband and two children. She has pursued a number of different creative outlets in her lifetime, such as stand-up comedy, filmmaking, writing, drawing, and more. One of her biggest hobbies includes travelling all over the world, and sharing the photos and experiences on her blog. When she’s not blogging about travel, the topics she’s most keen to discuss are crowdfunding, exploring diversity in media, and her experiences as a writer. Most of her writing these days can be categorised under the broad speculative fiction umbrella, and often includes pirates and/or mermaids, and queer female characters.

I’m an Australian/American currently living in Malaysia with my husband and two children. When I’m not writing, I travel as much as I can, see movies, and go out to stand-up comedy events. I used to perform stand-up comedy on occasion, and have made several short films, but those interests have fallen by the wayside since I’ve spent more time focused on writing prose.

I’m also an editor over at Solarwyrm Press and have put out my first anthology submission call. My aspirations for the future include putting that, and other anthologies, together, highlighting non-traditional characters such as those that fit LGBT and PoC labels. I have other novel ideas in the works, but probably my biggest aspiration is to one day write and/or direct a feature film that people can watch (I wrote one for ScriptFrenzy in 2007 but that should never see the light of day!)

I wrote short stories and plays in primary school, but I became more serious about my writing when I studied my Graduate Diploma in Media Production in 2005. That’s where I learned screenwriting and the art of storytelling, editing, and making sure you only show what’s necessary for the story. It was films that I was most keen on making, then, because I had a stronger background in watching and analysing film.

One book? Wow. I wouldn’t want to pick something from a series, then, because I’d be disappointed I couldn’t read the rest of it. But therein lies the difficulty, because I don’t think I’ve re-read anything that isn’t part of a series. Can I pick something that isn’t published? My editor has written a novel called The Long Trip, which I loved. Its protagonist, Max Fuentes, appears in my novel, Adrift. He’s just such an interesting and well developed character that I love reading.

4. What inspired your story?

A few things. My husband gave me some costume sleeves for Valentine’s Day in 2011, which led to me starting a pirate costume. Around the same time, I had wanted to write a short film I could shoot with a friend of mine. He suggested I write a pirate character for myself. Following that, as I was in an ongoing writing competition called LJ Idol at the time, a topic came up called “Cracks”. That made me think “a crack in time”, so I wrote a short film screenplay about a female pirate who travelled in time. The popularity of the piece inspired me to develop it further.

5. Your books going to be made into a movie, who would you cast in the main roles?

Lea Michele or Katharine McPhee for my protagonist, Jaclyn Rousseau. The role was written for me originally, but I don’t have the ability to pull off the singing aspect of the character like they can! Dick, however, was written for my friend, R Kevin Garcia Doyle, and I haven’t been able to think of someone else who could replace him. Kitty could possibly be played by Karen Gillan. Then, maybe Billie Piper as Prudence. It could be a bit weird having two Doctor Who companions act opposite each other in these roles, but UK actors are actually ideal, and I think they have the right look and background to take on those roles. It’s not as important for me that whoever plays Jaclyn has a specific accent, because I describe her as not sounding English even though she’s from England. She has mixed parentage (French and English) so her accent is mixed.

It depends what I’m writing. With most of my short stories, I’m a pantser. Adrift started out with me being a pantser writing all over the place, but I ended up having to plot everything out. I don’t think I could’ve finished it without plotting it.

The only trick, I guess, is having a couple of people standing in the wings, waiting to read what I write. That’s the biggest motivator for me – having people who want to read my words.

8. If you could be any fictional character for a day, who would it be and  why?

The Doctor. I’m not sure which one — maybe Ten. But his ability to time travel is awesome. Plus, why be a companion when you can be the Doctor himself?

Considering I got my writing training in screenwriting, I’m going to have to say movies.

So hard to choose! As much as I love my mermaid mythology, though, I’ll probably have to go with pirates. 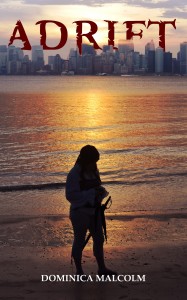 It’s the 21st century, and Jaclyn Rousseau is not where she should be. 1661 disappeared before her eyes, and there’s no way home. That matters not to Jaclyn—she lost her lover, and everything else that meant anything to her, in the West Indies.

In an adventure that crosses time and the Atlantic, a murderous pirate must find a place for herself in this new world.

Can she escape her past, or will it catch up with her?

Dick presses the down button, and watching the red light come on around the button distracts Jaclyn from the conversation.

“Is this magic?” Jaclyn asks, running her finger over the light. “How does the light work without fire?”

The lift bell dings and the doors open. “Electricity,” Dick says. “Probably a concept we should save for another time,” he adds, stepping inside the lift.

Jaclyn joins Dick inside the lift. “Could I try?” she asks, watching his fingers move toward the buttons, just before he has the chance to press one.

“Uh, sure,” he says. After a brief hesitation, he takes Jaclyn’s right hand in his and guides it towards the button for the ground floor, then adds, “Press this one.”

Dick lets go of Jaclyn’s hand and she uses her index finger to press the button. She smiles to herself as she watches the ‘G’ light up, then turns her head around to look at him.

“It may not be magic, but it feels like it is,” she says.

Dick smiles back at Jaclyn. He’s still unsure what to make of the woman. For someone who looks like a pirate, she comes across as pretty innocent, a little curious, and just full of awe about the twenty-first century.

“Perhaps you should believe in the unreal,” Jaclyn suggests. “After all, had you not met me, would you have believed in meeting a person who was born centuries before you?”

Dick ponders this thought as the lift doors open in front of them.

“No, I suppose not,” he says, not admitting to her that he still doesn’t really believe her. He exits the lift behind Jaclyn and adds, “Even if I had thought it was possible, I’d certainly not have dreamed of meeting a pirate.”

“I never said I was a pirate,” Jaclyn says, turning on her heel. “It is a wonder you even believe it possible of a woman.” She then raises an eyebrow at Dick and asks, “Why would you assume such a thing?”

“What else would you be, dressed like that, and carrying a flintlock?”

“So a woman cannot carry a pistol to defend herself? She must be a violent criminal?”

“You’re just going to keep making me feel stupid about everything I say in front of you, aren’t you?”

At this, Jaclyn cannot help but let a laugh escape. “My apologies,” she says. “But why would you be willing to help me if you considered me a pirate?”

“Good question.” Dick doesn’t know how to answer it. Fear that she’d kill him if he didn’t? That didn’t seem to be it. “I don’t know.”

“I intrigue you,” she answers for him, and brushes a hand across his cheek. “Do not be shy. I intrigue many men. It is why I must be able to defend myself.”

Her only response is to smile at him, which doesn’t answer his question at all.

“Fine, don’t tell the person helping you anything about who you are.”

“All in good time. I need to know I can trust you first. Now, the beach.”

If you’d like to read this book prior to its official release, you can pre-order it through Indiegogo