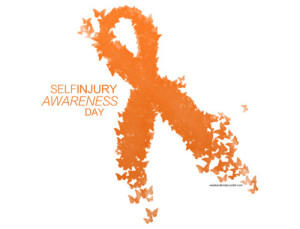 Today is Self-Injury Awareness Day is an annual global event involving several organizations which endeavour to create awareness about self-injury and self-harm. An orange ribbon is one of the many symbols associated with this campaign. To Write Love On Her Arms – a non-profit organization dedicated to helping self-harmers – encourages people to write ‘love’ or draw butterflies on wrists to create further awareness of this campaign. The goal of this global event is to combat negative stereotypes associated with self-injury and allow those suffering to come forward in the hopes of them finding professional help, understanding and acceptance. Many schools also get involved educating students, staff and parents about self-injury and what it really means.

In the spirit of Self-Injury Awareness Day, I thought I’d open up a bit about my teenage years. I was fourteen when I first discovered Linkin Park and started listening to a mix of gothic dark wave and heavy metal – genres of music often demonised and misunderstood. I used to paint my nails black, overdo it with eyeliner and drape myself in lace in the hopes of looking as undead as possible. I’d always been a darker soul, and so the subculture appealed to me on so many levels. I loved the exhibitionism of the subculture, I loved not only the acceptance of the darker side of life but that here were people who actively looked for the beauty in the macabre. It was through this subculture that I first became aware of self-harm in the early 2000s. This might lead to narrow stereotyping as well. Not all goths/punks/metalheads/emos self-harm but the phenomenon is prevalent in these subcultures, perhaps only because this type of music is evocative and doesn’t shy away from addressing issues like self-injury, depression etc. in the lyrics. I also found that listening to this type of music is far more cathartic than bopping along to Britney Spears.

For all 13 years of my schooling, I went to an all girls school where the bigger issues were anorexia, bulimia and teen pregnancy. Cutting hadn’t quite become the phenomenon it is today and was still very much kept a secret if admitted to at all. It was only when I went to university, that I met people who suffered from and or indulged in self-injury. They say 19 is the most tumultuous age and I can certainly attest to that. Being away from home for the first time, surrounded by new friends so different from my sheltered, Catholic, private school social circle, my eyes were opened to a whole world I only knew existed thanks to song lyrics and the news channel. I met kids who had and were being abused by parents, I met rape victims, I met kids who came from broken homes, I met runaways and drug addicts, I met kids who’d tried to kill themselves and who had to live everyday with the scars and the stigma of being on psychotropics.

Self-injury was no longer something American rock stars screamed about in ’emo’ songs. It was real and bloody and all around me. The biggest lesson I learned through some truly amazing people who took the time to talk to me about what they were going through is that self-injury doesn’t always involve razor blades and arms. Self-injury isn’t always that obvious and, contrary to popular belief perpetuated even by well meaning groups like To Write Love On HER Arms, self-injury is prevalent amongst boys too and is often far more severe. Self-injury can take on numerous forms and several of these go completely undetected or ignored. That’s why SIAD is so important, not for those kids who bare scarred arms to the world but for those kids who hide their pain, unable or unwilling to get the help they need even if they might not want it. 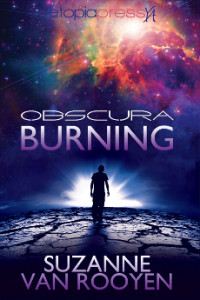 Kyle, the main character of my novel Obscura Burning, self-harms. So in the spirit of SIAD , I’m giving away an eBook copy of my book Obscura Burning. Please note that while self-harm is not the main theme of my book, certain scenes may be triggers.

I’d love to hear about your experiences and thoughts on this topic so please feel free to leave a comment!