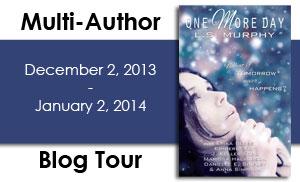 What if today never ends?

What if everything about life—everything anyone hoped to be, to do, to experience—never happens?

Whether sitting in a chair, driving down the road, in surgery, jumping off a cliff or flying … that’s where you’d be … forever.

In One More Day, Erika Beebe, Marissa Halvorson, Kimberly Kay, J. Keller Ford, Danielle E. Shipley and Anna Simpson join L.S. Murphy to give us their twists, surprising us with answers to two big questions, all from the perspective of characters under the age of eighteen.

How do we restart time??How do we make everything go back to normal??The answers, in whatever the world—human, alien, medieval, fantasy orfairytale—could, maybe, happen today.?Right now.?What would you do if this happened … to you? 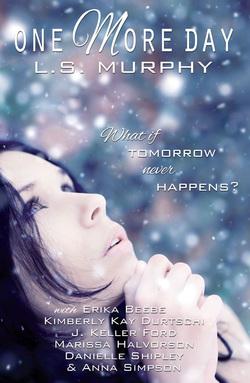 A boom shook the classroom. Scarlett shrieked, and clapped a hand over her mouth. Heart slamming in her chest, she lifted her eyes and scanned the room. In one corner, Matthew stared straight ahead of him. Behind him, Bailey leaned so far over her desk, Scarlett thought she would fall headfirst off the table.

A few desks in front of Scarlett, Jed pushed his exam away from him, his glasses sliding halfway off his nose. He crossed his arms and leaned back in his seat. Leah tapped her pen against the desk without rhythm, fluttering her eyes at Toby.

The rumble didn’t seem to affect anyone.

How did they miss that? There had been a noise. Hadn’t there? The stress of the test must have been getting to Scarlett.

She shook her head, as if to rid herself of the confusion, and forced her gaze back to the paper in front of her. The instruc- tions at the top read: In no less than 500 words, persuade a fellow student to part with his or her most valuable possession or deepest desire for the greater good.

With pencil to page, she began to write, only to glance at her watch—twenty minutes left in the exam, and half her essay remained undone. No wonder she was nervous.

A second boom rocked the schoolroom, and she gripped the shaking desk.

Nobody else did the same.

This can’t be real. I’m going crazy, or something. Maybe I’m dreaming. She squeezed her eyes shut, inhaled, exhaled, and returned to her paper. She pressed her pencil against the page and stifled a curse when the lead broke. Reaching for her sharp- ener, she clutched the writing utensil as the classroom shook for the third time. The essay vibrated off her desk, the nearly blank composition fluttering in a breeze to the ground.

What the hell? Her imagination had not pushed her test off the table. It was capable of a lot of things but not that.

Scarlett waited for the rumble to happen again. The clock ticked behind her. Fifteen minutes. Twelve. Ten. She’d never finish the assessment. How could she focus when the room kept shaking? Scarlett retrieved and set her paper on the desk, and leaned back in her chair, staring at the mostly blank page.

The boom came right then.

Starting from least favorite on the list and going to most favorite: 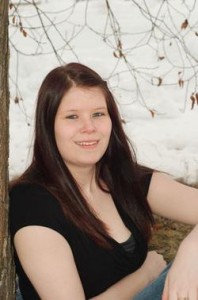 Marissa’s dream of writing came about when she was ten, after reading a particularly inspiring story of dragons and elves. She instantly fell in love with the fantasy genre, and characters soon began to manifest to satisfy her adoration. It started with a forty page handwritten novel, which she dubbed “Dragon Girl” and continued on to more challenging (and better written) works.

Now, Marissa can often be found to be studying literature in English class, curled up at home with one book or another, or with her eyes glued to the computer screen asher newest set of characters manifest.

This entry was posted in Blog, Reading and tagged fantasy, reading, YA. Bookmark the permalink.