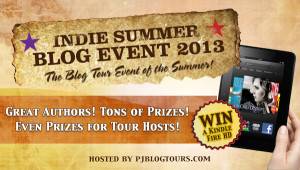 As part of the Parajunkee’s Indie Summer Tour, I’m hosting author K.C. Finn and her novel The Atomic Circus… 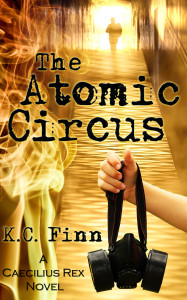 A story is never a good story unless it starts with a murder. The more unusual the murder, the better the story, generally speaking.

Meet Caecilius (KAI-KILL-EE-USS) Rex, a young detective in the not-too-distant future, a smog-filled post apocalyptic world riddled with crime and conspiracy. When a new case quite literally falls at Rex’s feet, he teams up with his neighbour and associate Kendra Nai, an ex-army sergeant recently dismissed, to investigate. Little do they know that the events of The Atomic Circus will be the first step to solving the case of a lifetime.

My free time and my future aspirations are very closely linked at the moment as I’m focused on getting my postgrad qualifications. I am currently studying for my teacher’s training certificate, my DELTA teaching diploma and a Master’s Degree in Education, so between all those things and producing my books I’m afraid I don’t do much else that’s exciting! I enjoy travelling, reading and listening to all different kinds of music; I’m also the teacher of a creative writing class, which is the best place for a writer to be!

I have always been a writer as far back as I could hold a crayon; I can still remember making comic books and story books in primary school with my friends. I took up writing seriously in the winter of 2012 as part of a process of rediscovering my creative freedom – I had previously been in a very restricted phase (not by choice, I’ll add) and I was keen to start expressing myself and sharing my work with others again. As I also suffer with a long-term illness, writing provides an escape for me from the strains of daily life and I sincerely rely on it now to help me through hard times.

I’m going to have to go with my gut here and say the complete works of William Shakespeare. If I had that with me I could run the whole gamut of human emotion time and again and engage with some of the most incredible characters ever developed. I also really adore the beauty of the language itself; just speaking Shakespeare out loud is enough to make anyone feel really intelligent and important!

4. What inspired The Atomic Circus?

The name itself came right from the classroom when I was teaching English as a foreign language to some French and Spanish students. I had ‘atomique’ and ‘cirque’ written down in front of me on my desk from a translation exercise and I put them back into English to take a look at them as a potential title. (On a sidenote, I am forever coming up with titles that I will probably never get around to using, but this one happened to stick!) From that sprung the notion of what an Atomic Circus would be, what kind of place, what it would look like. I threw in Caecilius Rex, my detective character that I’d already been working on for quite a while, and the story just started to write itself! 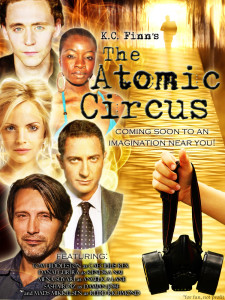 5. Your book is going to be made into a movie, who would you cast in the main roles?

I’ve thought about this very carefully for you! There are five roles that I’d like to cast in this question, although one of the characters is only a small role in The Atomic Circus (Redd Richmond), he does become a much bigger character as the series goes on. So for Caecilius we’ll go with Tom Hiddleston, Kendra would be Danai Gurira (with plaits rather than the shaved head), Angelica is definitely Mena Suvari, Damian has and will always be Sasha Roiz to be, and Redd Richmond would be the delicious Mads Mikkelsen, just because I can, but also because Redd has to be super sexy.

I’m a hybrid breed I’m afraid. I begin in the pantser stage running on a series of images and immediate ideas that have struck me, and then as the story develops I gradually merge into my plotter form to make sure everything makes sense throughout the tale. Plot is vitally important to a mystery, of course, so I would never be without that part of my personality at the end of the creative process, but it’s incredibly freeing and motivating to start in the pantser mode and get really excited about a new plot.

I wish! I do drink a ridiculous amount of tea and it’s quite important to me that there isn’t anything inane going on in the background like the news on TV or someone chatting on the phone. I don’t need total silence to write, although it does help to be alone, especially as I like to get up, walk around and act things out using the voices of my characters!

8. If you could be any fictional character for a day, who would it be and why?

Hmm. Most of my favourite characters have pretty nasty things happen to them in books, so it’s quite hard to pick one to become. I think I’m going to go with Captain James Hook from J.M. Barrie’s Peter Pan. I would love to rock that pirate outfit and get carried around in the throne by my pirate underlings, plus the curly black hairdo is to die for, I wish I could get mine like that! He’s an excellent mix of elegance and cruelty, and the sadist in me would love to take a look around in that mind.

1. Your name is quite a mouthful. Does it have a special meaning? Do you prefer going by a nickname?

Yes I do have a lot of trouble getting people to say it right. It’s KAI-KILL-EE-USS if that helps you at all. I believe it’s an ancient Roman name, which tells me that my father cared more about his history books than whether or not his son would enjoy having a name that nobody can pronounce. I do prefer people to use my full name if they can, but most people call me Rex at the station to save time. Close friends call me Cae, but I’ll admit I’ve not got many of those right now.

2. What single thing or goal do you want most in life?

My motus operandi will always be to prevent crime and seek justice; I’ve always had an interest in the law. I was a police cadet when I was 19, and my mother was murdered, so I’d definitely say that what I want most in life is to find out why she was killed and who by.

What does anybody fear these days? Isolation, rejection, getting toxicity poisoning from all the smog and fumes in the atmosphere outside. I sometimes have these nightmares where I’ve forgotten my gas mask and I’m in this huge smoky quarry. These horrible green eyes keep staring at me, but I’m dying, and nobody comes to help. If that’s not a scary way to go, I don’t know what is.

Well not to spoil a fine tale for you, but I have nearly died a few times. But I’ve learned a lot about the people around me, especially who my real friends are, and most of all who to trust. Other words I could use to describe the last fortnight would include painful, hectic and tiring. My brain could use a serious rest from all the conundrums, but I have a mission to fulfil, now more than ever. I guess it’s true when they say that there’s no rest for the wicked.

I suppose you’d expect me to say that I wish my mother hadn’t been murdered, but actually what I really wish is that my father hadn’t gone missing. If he hadn’t upped and left us so suddenly, my mother wouldn’t have gone out investigating and looking for him, and I’m fairly certain that it was him she was hunting down when she crossed paths with the wrong person. If he hadn’t been so selfish as to vanish on us, she’d probably still be alive.

6. If you could have any super power, what would it be and why?

I think I’d like to be physically stronger, more resilient I suppose. I do suffer with a lot of scarred tissue and damaged muscle from an incident that I’d rather not go into here. Suffice to say it’s not easy for me to build strength naturally, which is not ideal when you’re dealing with savage criminals on an everyday basis. Kendra tells me that what I really need is better co-ordination, but that’s easy for an ex-army sergeant to say!
a Rafflecopter giveaway

See the giveaway details
at Goodreads.