…Or why I’ve sacrificed precious writing time to rewatch season 5 of White Collar. 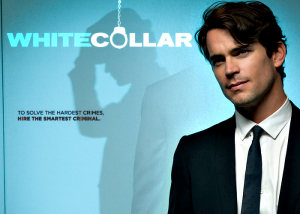 I have a highly addictive personality and generally finding myself slipping from one obsession to another. My current obsession, however, has lasted more than a month! A little while ago my husband and I started watching White Collar – a series about a conman who becomes a criminal informant for the FBI in exchange for being released from prison on an ankle monitor. While that concept alone isn’t super unique, from the very first episode, I was hooked. We both were, which is something that happens extremely rarely so that was the first sign this series was something special.

We devoured all five seasons in three weeks and then proceeded to rewatch our favourite episodes before committing to a season 5 rewatch in preparation for the new season coming out next month. This has NEVER happened! In more than 7 years of watching TV together, we have never ever both wanted to rewatch a series and right away despite addictions to several like Heroes, Lost, and Firefly. So, clearly White Collar was doing something right to keep us both enthralled first and second time around – and feeling physical pain knowing we have to wait another 3 weeks for a new episode. Time to disect this series that sucked up all my writing time and learn from this obsession. Here’s what White Collar has taught me:

2) In the very first episode, Neal Caffrey – the conman and anti-hero of this show – was introduced not only as a criminal mastermind with a dubious sense of morality, but as a human being, someone flawed and easy to relate to because of the decisions he makes for love. He could’ve come across as a cold, calculating and manipulative conman, but instead he instantly tugs at our heart strings making it easier to forgive his criminality. To be fair, it certainly doesn’t hurt that Matt Bomer is eye-achingly good looking.
How this relates to writing? The protagonist should be immediately relatable. Show the reader who they are and make sure they are flawed, that they are human and want the same things we do – love, friendship, understanding – whether they’re a shapeshifter, vampire, billionaire playboy, cyborg or criminal.

A heartbroken conman still tugs at the heart-strings

3) Instead of pairing Neal up with a bumbling policeman, the show presents Peter Burke, a highly intelligent FBI agent who is Neal’s equal and in some ways his better given Neal’s weakness for women and his stunted emotional development. The rapport between these two characters was established in episode one and became the central relationship around which the story orbited – proof that a purely platonic relationship can take center stage in a story if done well, and this is with just the right mix of antagonism, distrust, love and humour!
Create main characters (or love interests) that are different and unique from each other, but still equals, this way they can truly challenge each other, and create an explosive dynamic. Let them push each other’s buttons, confound, frustrate and ultimately force each other to change – for better or worse – in a way that is both authentic and entertaining. 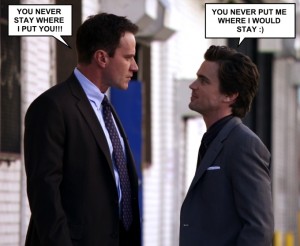 4) Despite the serious nature of the show – this is about the FBI tracking down white collar criminals after all – the high-stakes tension and emotional ups and downs are frequently tempered with dashes of witty humour. There isn’t any one character used for comedic relief, but rather the entire cast is well developed enough to crack jokes that reflect and develop their characters. Of course the banter between Mozzie and Neal, and Neal and Peter steals the show and makes for just as many heart-breaking as hilarious moments.
Humour is so important. Even if the theme of the book is deadly serious, a little levity goes a long way and can actually enhance the emotional gravitas by giving the reader a breather before jumping back into the serious. This is something I need to do better in my own writing, which tends to run dark without enough light to balance it out. 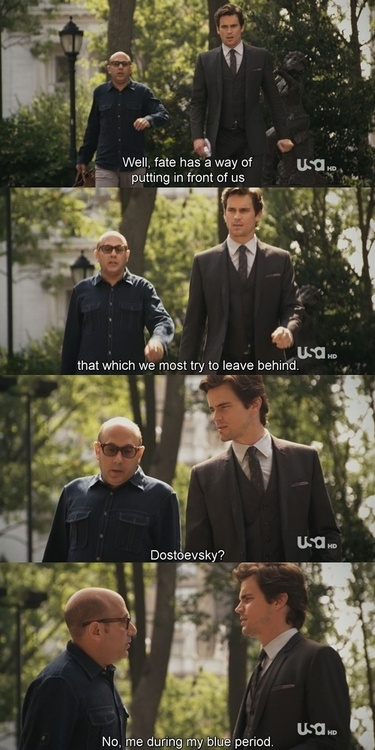 5) Characters are the most important part of any story. It doesn’t matter how sexy the caper, how intriguing the case or mysterious the circumstances, in the end I wasn’t watching White Collar as a police procedural, rooting for the good guys to catch the bad because there’s an awful lot of grey in this serious, often with no clear line drawn between right and wrong. It didn’t matter, what did matter was that Neal and Peter’s relationship survived the case and that they were stronger for having endured what was thrown their way, often as a direct result of the other’s actions. Cons aside, this series is about people struggling with baggage, struggling to make sense of the world and their place in it when their values and beliefs are constantly being challenged.
Characters make the story. Doesn’t matter how heart-palpitating and clever the plot, if there aren’t characters readers can invest in, care about and root for then the story will fail. Have authentic, complex characters though and readers will overlook plot holes because of the stars in their eyes and love in their hearts for your MC.

Having now got White Collar out of my system – for the time being – I hope I’ll be able to apply at least a little of what the stellar writing in this show has taught me. For the last 6 weeks I have been totally enamored with Neal Caffrey, and now I want to create my own Neal Caffreys for readers to fall in love with!

Which TV shows are you addicted to? Have any influenced/inspired your writing?