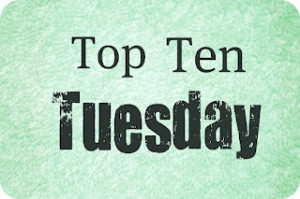 I haven’t done a Top Ten Tuesday post in ages, but since today was a free day on the blog I thought I’d join in, listing my top ten topics that will make me NOT want to read a book.

1. Mothers, babies, pregnancy, abortion. Anything to do with mewling infants on their way, in the world or unwanted. Just not a topic I want to read about.

2. Romance. I’m not a huge fan despite having tried contemporary, historical and even paranormal novels. If the main story revolves around romance and the melodrama thereof, I just can’t read it.

3. Religion. I have no problem with books that have religious content for authenticity’s sake such as a Christian/Muslim/Hindu character etc. but if the religious aspect comes across preachy or the book has a religious agenda, I won’t touch it.

4. Cheerleaders. I don’t understand the culture of cheerleading and after watching Friday Night Lights and getting a small dose of cheering in The Vampire Diaries, it’s just not something I want to read a book focused on.

5. Sports. I’m not into sports at all. I don’t mind going swimming or playing tennis, but I don’t want to read a book that revolves around a sport. I tried with Barry Lyga’s Boy Toy and the fact that I didn’t understand any of the baseball references just frustrated me. Won’t touch it.

6. Vampires. I love vampires! I do. But I’m exceedingly fussy because I fell in love with vampires like Lestat and Nothing, Marius and Zillah – I don’t much care for the sparkling/vegetarian/gentle/cute/cuddly variety populating much of YA fiction these days.

7. Chick-lit/women’s fiction. I prefer reading male POVs and much prefer ‘boy stories’ to the type of stories that often get dubbed chick-lit or women’s fiction. Just not my scene.

8. High school drama. Again, I’m just fussy here and since I rarely read contemporary fiction at all, when I do, I prefer to avoid much of the melodrama and stereotyping that comes with high school set stories. I cannot stand Glee and don’t want to read books like that series, ever.

10. 20th Century History. Give me Aztecs and Vikings, the Crusades, the Spanish Inquisition, 19th Century opium dens and the Victorian era, but if it’s WWI, WWII or set anywhere in the 1920-1960 bracket, I won’t read it. Bores me to death!

What are your Top Ten book turn-offs?