It’s not a bad plan for someone with a hidden, emotion-based ability to trigger earthquakes. In a world pitted against her, sixteen-year-old Rena Moon strives for a life beyond working herself to death at the factory. Seeing an alternative, she risks selling relics from the forbidden lands at Market. It becomes the worst decision she ever made. Someone kidnaps her best friend in exchange for the one thing that would end her oppression.

Driven by loyalty, Rena and seventeen-year-old Nevan Jelani, soulful composer, green thumb extraordinaire, and the secret love of her life, plot to rescue her friend and reclaim her salvage. Still, the thought lingers whether Nevan is a true hero or another thief waiting for his chance at her loot. Events spin wildly, deepening Rena’s suspicions and pushing her limit of control. With more than her chance for freedom at stake, she must decide if she’s willing to kill to protect what’s precious to her. For once, the Overlord isn’t holding all the power, but can Rena live with being reduced to what she’s trying so hard to escape? 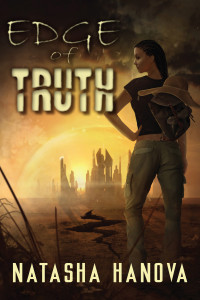 A transport vehicle plastered with an image of Overlord Andrick’s almost smiling face sped to the scene. A Syn exited, picked the boy up with one hand, and tossed him in the back. Rena felt the engine rumble through the ground as it drove away. She wanted to stomp her feet and squash the lingering sensation, but resisted.

She struggled to keep a normal, non-­conspicuous pace, and even more not to hide her ring. Only guilty people tried to hide. “Did they see us?”

“Don’t think so,” Blaze whispered as she pulled off her new ring and stashed it in her pocket. “Know anyone around here?”

Warmth burned her cheeks. She stared at a blue house with a gray roof. He was inside. “Uhh… Nevan lives in that house.”

“Let’s go.” This time, Blaze did the dragging as Rena planted her feet.

“Are you crazy?” she whispered as she checked the position of the Syns, still three blocks away. “We can’t go to Nevan’s house. I’ll die.”

“Well, we can’t exactly stay outside. Do you want to get caught, too?”

The androids weren’t that close, yet. Okay, maybe they were, but knocking on Nevan’s door?

“We don’t have time for this.”

“This house here is closer.” She rocked side to side while raking her hands over frizzy braids. “Let’s just go there.”

“And what if the tenants alert the Syns?” Blaze peered over Rena’s shoulders. “We don’t have time for your version of rational.”

“Blaze… What if he turns us away?” The corners of her eyes glistened. Fear of detection battled for dominance over fear of rejection. “I don’t think I can handle that.” She wasn’t ready to find out the truth.

Blaze lightly tapped at the door. After a few seconds, she knocked harder and took a step back. “I don’t think anyone’s home.”

“I could’ve sworn I saw someone peeking out.” Rena had actually felt foot vibrations from inside the house, but she was so used to protecting her secret, the lie came out first.

“Rena! Why didn’t you say so? We don’t have time to waste on people who obviously aren’t going to help.” She brushed past her to the blue house.

The Syns neared. One stopped to identify a pedestrian on the opposite sidewalk. The other angled toward the girls.

Blaze stood on the front porch, jabbed her finger down at the ground and mouthed the words, “Get. Over. Here. Now!”

She shuffled across the lawn to postpone the inevitable. When she stepped onto the porch, Blaze shoved her forward, then reached around her to knock.

“But, what if his parents—” she started to say, but stopped. Someone walked toward them. By the lyrical footsteps, she knew exactly who it was.

Natasha Hanova is an award-winning author of young adult and adult dark fantasy/paranormal fiction. Her short stories are published in Undead Tales 2, October Nightmares and Dreams, and Once Upon a Christmas. She is a member of Novel Clique, YALitChat, and an Affiliate member of the Oklahoma Writer’s Federation, Inc. She lives in Kansas with her wonderful husband, twin boys, and daughter.

This entry was posted in Blog, Reading and tagged dystopian, Edge of Truth, science fiction, YA. Bookmark the permalink.