In Darkness We Must Abide – an NA Gothic Romance

Today I’m pleased to welcome Rhiannon Frater to Off the Page chatting about her NA Gothic romance In Darkness We Must Abide. 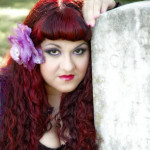 Rhiannon Frater is the award-winning author of over a dozen books, including the As the World Dies zombie trilogy (Tor) , as well as independent works such as The Last Bastion of the Living (declared the #1 Zombie Release of 2012 by Explorations Fantasy Blog and the #1 Zombie Novel of the Decade by B&N Book Blog),and other horror novels. Her next novel for Tor, Dead Spots, will be published in 2014. She was born and raised a Texan and presently lives in Austin, Texas with her husband and furry children (a.k.a pets).  She loves scary movies, sci-fi and horror shows, playing video games, cooking, dying her hair weird colors, and shopping for Betsey Johnson purses and shoes.

In Darkness We Must Abide

A Modern Horror with a Gothic Romance

In Darkness We Must Abide is a very unique experience for me as a horror writer. Not only is it a continuing serial with three planned seasons, but it’s also a story driven by the relationship between my two leads, Armando and Vanora.

Growing up, I loved gothic romance. Jane Eyre continues to be my all-time favorite novel. I used to gobble up Victoria Holt novels like candy. I loved the complications of a gothic romance. The characters were flawed, but somehow had dynamic chemistry. The endings were not always happy, but the couples were always fascinating to read about. It’s that type of romance I’ve infused into my serial.

Armando and Vanora are not perfect people. Armando is a 400-year-old vampire with many, many secrets. The Spanish vampire is often torn between his service to his mysterious, dangerous vampire Master and the feelings he has for Vanora and her family. Vanora is an albino, and the world is not always kind to her. Orphaned at a young age, she’s been raised by older siblings. To make matters even more complicated, Vanora has inherited her mother’s sixth sense and when she first meets Armando she senses danger. Despite all their difficulties, both characters’ actions are heavily influenced by their feelings for each other, in both good and bad ways.

When our story begins, Vanora is ten years old when her life changes forever, when her brother brings home their ancestors from Romania to be interred at their estate in Houston, Texas. When Roman has one of the old coffins unchanged, he unleashes an evil that threatens not only his life, but that of his two half-sisters, Alisha and Vanora.

A few years later, a mysterious stranger, Armando, enters her life and Vanora develops a mad crush on the charismatic Spanish vampire. All is not what it seems with Armando, and he is a keeper of many secrets that can potentially adversely affect her life. Through the first four episodes we witness Vanora growing up and becoming a strong young woman. By the end of episode four, The Gift, Armando has taken note as well, which leads to the dramatic and heartbreaking events in episode 5, The Vampires.

Because Armando doesn’t fully enter the story until episode 3, The Arrival of Armando DeLeon, I was had to find an inventive way to let the reader know about his impending arrival. I already knew from past beta readers that he is a huge draw to the story. That is how the prologues were born. Each episode starts in the “present” time period, where an adult Vanora is interacting with Armando, then flashes backwards in time. Each prologue hints at terrible events happening in the present time period and hints that something passionate once happened between Armando and Vanora, though they now appear estranged.

Season 2 will finally bring the two timelines together in a terrifying dramatic scene. Armando and Vanora’s relationship will continue to be at the core of the story as they face the ultimate evil that is coming to destroy their lives. Whether or not they will find true love in each other’s arms and a happy ending has yet to be seen. 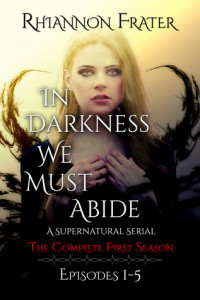 In Darkness We Must Abide is the epic saga of one young woman caught in the dangerous world of the creatures of the night.

Already living in the shadows due to her albinism, Vanora is just a little girl when her older brother inadvertently unleashes a terrible evil from the family crypt that changes their lives forever.

As she grows up in a world where beautiful deadly beings hunt by night, one captures her eye and her heart. Yet, can she trust the mysterious Armando? For there is a powerful entity plotting to claim her when she reaches adulthood in order to fulfill an ancient prophecy, and her enemy has enveloped her in a web of deceit, casting doubt on all she believes to be true. Soon, she will have to fight not only to save those she loves, but also for her very soul.

Rhiannon Frater delivers a chilling adventure once again with this multi-part epic serial with a dynamic cast, old school vampires, bloody action, a smoldering forbidden love, and a terrifying villain set against the backdrop of a modern day vampire war.

This paperback includes all five episodes of the first season of the serial.

What do you love about Gothic romance?

This entry was posted in Blog, Reading and tagged Gothic romance, In Darkness we Abide, new adult, Rhiannon Frater. Bookmark the permalink.