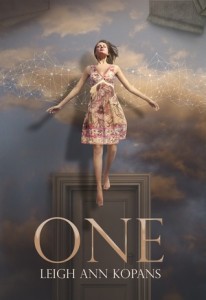 Title: ONE
Author: Leigh Ann Kopans
Genre: YA science fiction / superhero
Pages: 374
Blurb: When having two powers makes you a Super and having none makes you a Normal, having only one makes you a sad half-superpowered freak.
It makes you a One.
Sixteen-year-old Merrin Grey would love to be able to fly – too bad all she can do is hover.
If she could just land an internship at the Biotech Hub, she might finally figure out how to fix herself. She busts her butt in AP Chem and salivates over the Hub’s research on the manifestation of superpowers, all in hopes of boosting her chances.
Then she meets Elias VanDyne, another One, and all her carefully crafted plans fly out the window. Literally. When the two of them touch, their Ones combine to make them fly, and when they’re not soaring over the Nebraska cornfields, they’re busy falling for each other.
Merrin’s mad chemistry skills land her a spot on the Hub’s internship short list, but as she gets closer to the life she always wanted, she discovers that the Hub’s purpose is more sinister than it has always seemed. Now it’s up to her to decide if it’s more important to fly solo, or to save everything – and everyone – she loves.

I’m a huge fan of comic books, of superhero stories in general, addicted to series like ‘Arrow’ and all those Marvel movie adaptations like ‘The Avengers.’ There are a great many YA books on this theme but not many like ONE.

When I first heard about ONE, I had this idea of the story being the usual dystopian fare with extra superpowers. I imagined the book being heavy on the science fiction in a world unlike our own. When I saw the cover, I knew I was wrong. ONE is not the usual dystopian story although there is definitely a dystopian theme to this story. It’s also not hard sci-fi, but rather a character driven story that reads more like a contemporary novel. The characters in this story just happen to be able to walk on water or teleport or fly.

To be honest, I was a little disappointed at first. I thought I was getting epic sci-fi and got a quieter, emotional story about a girl caught between who she is and who she wants to be. Once I got over my genre preconceptions, I started enjoying the book and the subtle way the author wove in the themes.

Because I went into this expecting science fiction, I was not in favour of the relationship between the main characters. It was a bit too insta-love for me and I didn’t think it belonged in the science fiction book I thought I was reading. Again, once I changed my mindset, their relationship made more sense and I became totally engaged by the two lead characters. I still feel that their romance was a little rushed and that they didn’t give each other, or the poor reader, much time to get to know them before falling head over heels.

I can’t believe this book is 374 pages long. It felt half that length and one of my major gripes about this book is that it felt too short, the story too compacted and rushed. I would’ve been happy reading another 20 000 words if it gave me and the characters some more breathing room.

The prose flows really well, making for quick reading. The author does description so well, I wish she’d done more! There were times I felt like I was right there seeing that Nebraska sunset.

The plot is great, but because I love this genre so much and have read/watched a lot of these sorts of stories, I did find it a tad bit predictable. That said, the plot is fast paced and the build-up to the great reveal is riveting.

The science in this book! I loved it! It might not be for everyone though but for those who like geeking out while reading YA, this book is definitely for you.

I enjoyed the characters but I wanted to get to know them better, all of them including the two sets of twins. The author introduces these really interesting characters but merely teases with them, never letting the reader spend more than a page or two getting to know them. Even the main character, Merrin. Despite the whole book being from her perspective,  I feel like I don’t know her very well, and I really wanted to! Still, a set of very likeable characters with whom I empathised immediately.

The ending! That final sentence is just perfect. While I’m not sure I really understand all the choices made in this novel, particularly by the adults, that ending leaves the story wide open for a sequel I hope is coming. I look forward to the next book(s) and getting to know Merrin and Elias a lot better.

Final verdict? For me this was somewhere between 3 and 4 ink splats, but I’m leaning towards 4 because I know more is coming and I trust the author to give me more character development, and more great plot.

This entry was posted in Blog, Reviews and tagged Leigh Ann Kopans, ONE, superhero, YA science fiction. Bookmark the permalink.