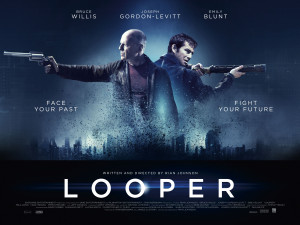 2012 was a decent year for science fiction on the silver screen. We had everything from the comic and epic Avengers to bombastic Battleship and the super cool Total Recall remake. There was also Looper, made note-worthy thanks to the incredible prosthetics applied the Joseph Gordon-Levitt to turn him into a young Bruce Willis. That alone was enough to pique my curiosity.

Looper: In 2074, when the mob wants to get rid of someone, the target is sent 30 years into the past, where a hired gun awaits. Someone like Joe, who one day learns the mob wants to ‘close the loop’ by transporting back Joe’s future self. (Thanks IMDB).

I expected a Total Recall romp with lots of action, improbable gun fights, heroic martial arts displays, a fair amount of running away from the bad guys and playing with futuristic gadgets. Looper was all of that and then some. There was actually substance to this story and felt a lot more like a drama than an action movie. The trailer is a little misleading. Without being too spoilery, suffice it to say, that all those cool action shots aren’t really what the movie is about. At it’s core, Looper is about a guy examining his choices in life, how those choices affected others and how far he’d be willing to go for others. Pretty intense and dramatic stuff.

As the credits rolled, my friends and I looked at each other and said “That was good.” As in, far better than we expected because honestly we expected flashy sci-fi action and got a more introspective story, which was pleasantly surprising.

Fast forward an hour to when the initial post movie stars in our eyes have faded to bear glimmers and we started analysing the story. I do this with every movie we watch because I like to know what works and why, what doesn’t and how the story could’ve been improved for my own use in writing. So the analytical phase began and the more we examined the movie the worse Looper became.

*Warning: There be spoilers ahead*

1) The whole premise is deeply flawed. Apparently, people are sent back in time because disposing of a body is hard in the future – Um, why? But they never elaborate and we just have to accept that this is the way the world works.

2) Loopers are sent the future versions of themselves to kill and ‘close the loop’ along with a payout in gold and early retirement. This is where things go wrong, so why send the Loopers their future selves to kill? Wouldn’t it be cheaper and easier to send the offending Looper to another Looper for regular offing? Again, this is never explained and we just have to believe it’s the way the world works.

3) Having closed the loop, the Looper in question is free to enjoy his gold for 30 years before being sent back to the past for offing in some sort of weird continuing cycle that honestly defies the laws of physics. Physics and quantum theory of time travel aside, why on earth would you give this Looper a bunch of gold and 30 years to live when you could just off said Looper in the present and save all future woes? This system makes NO sense. None. I’ve tried looking at it from every angle and it just isn’t practical or economical. It’s not good business.

4) In a completely random and almost completely unrelated subplot turned mainplot, by 2074 people will have evolved a special telekinetic gene. Why? How? No one knows but it’s convenient for making little boys into super creepy antagonists. I don’t even know why this TK-gene thing was shoved into this story that would’ve been way more awesome as an existential examination of what happens when a Looper is accidentally sent their future selves to kill because if you know you’re going to have to off your future self one day, what’s the big deal? You go in knowing this is going to happen. Again, the trailer is misleading because it implies that future-self meeting present-self is all a surprise when it very definitely isn’t.

So, at first glance Looper is a great movie – fun and intriguing, creepy and dramatic, action packed and occasionally comical but don’t think too hard about the story because as soon as you look a little too closely, the whole thing starts to fall apart. Looper could’ve been brilliant but it just wasn’t. Instead of dishing up thought-provoking science fiction, it dishes up mediocre action with a dash of anorexic romance that just disappoints if you’re looking for anything more than two hours of brain numbing entertainment. I wish Hollywood would make more movies like Equilibrium and Strange Days and Mr Nobody instead of movies that continue to undermine the potential brilliance of this genre.

Anyone else watched this movie? What did you think?