QUILTBAG Heroes and The Normal Heart

It’s been a long time since I’ve dedicated a Wednesday to a QUILTBAG Hero. Today I’d like to talk about not just one, but several of these heroes in the context of a film I watched last week and am still getting over. This is a movie that made me feel angry, ashamed, devastated, and disgusted, as well as inspired and here’s why.

In the 1980s in America, a much misunderstood disease plagued the gay community. Dubbed the ‘gay cancer’ and frequently treated with chemo with a near 100% mortality rate, HIV/AIDS ravaged the gay population. People were dying but nobody knew what was killing them let alone how to treat it or prevent it from spreading. Enter Larry Kramer, a playwright, author and LGBT rights activist. Kramer co-founded the Gay Men’s Health Crisis, an organization dedicated to helping those with HIV/AIDS and educating the gay community. When he was eventually ousted from his own organization, Kramer vented his frustrations in the form of a semi-autobiographical play called The Normal Heart. 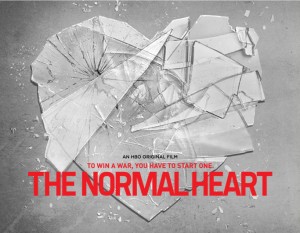 Having grown up in South Africa, a country with the most high profile HIV epidemic in the world, it always baffles me that HIV/AIDS be considered a ‘gay’ disease as it was in America and many other parts of the world. In Africa, this disease attacks young and old, gay and straight, black, white – none of that matters and this is a fact that’s been well understood for decades. Watching a film where HIV/AIDS is pigeon-holed as a curse on or punishment for a certain sexuality is almost surreal and beyond tragic.

The Normal Heart isn’t my first HIV/AIDS focused movie. I watched and shed several tears during Philadelphia and I sobbed through the end of Dallas Buyers Club, but as potent and meaningful as those two films were, neither hit me half as hard as the TV film adaptation of The Normal Heart. I think this is due in part to the fact that The Normal Heart is written by a man who lived through the very crisis at the heart of the story and that the semi-autobiographical leanings of the screenplay lend a certain gravitas and authenticity to the film. The fact that a gay man, Ryan Murphy, directed The Normal Heart and that the film starred several known gay actors – namely Matt Bomer and Jim Parsons – also added to the reality of what I was seeing. These people aren’t just playing at being gay or being affected by the issues highlighted in the film – these men are living in a world directly affected and shaped by the events taking place in the story and that somehow packed a significantly greater punch.

I couldn’t watch The Normal Heart in one sitting. It was too much. Mark Ruffalo is outstanding in his role as Ned Weeks (a fictionalized Larry Kramer) and the monologues he delivers in the film whether to his brother, lover, friends or enemies, often had me choked up with ineffable emotion, overwhelmed by the bitter desperation in his pleas for those around him to take note of their plight. I really wish I could find a copy of the script somewhere because there are entire scenes I would love to frame and hang on my wall as a stark reminder of the battles men like Ned (like Larry Kramer) fought then. Without these pioneers of LGBT activism, we wouldn’t be where we are today.

What left me the most destroyed after watching this film was the relationship between Ned and his one true love, Felix Turner – played by the beautiful Matt Bomer. Why does it matter that he’s beautiful? Because we see a healthy, young and exquisite man wither and die on screen and that physical transformation in itself was shocking and devastating. (Kudos to Matt Bomer for risking his health to drop 40 pounds for the role). But the physical ramifications of the disease weren’t nearly as eviscerating as the emotional journey for these two characters coming from very different backgrounds: Felix has an ex-wife and son who he is not allowed to see, but despite that has still allowed himself to love and form committed relationships with men, while Ned is blatant about his sexuality yet emotionally repressed to the point of denying himself any emotional connection, preferring nameless one-night hook-ups. In the words of Felix:

Men do not naturally not love. They learn not to.

It’s only when Ned meets Felix – again – that Ned allows himself to love, which of course results in tragedy when Felix is diagnosed with AIDS. Watching their relationship unfold in a candid portrayal of how the disease physically progresses – seriously, little is left to the imagination – as well as the psychological and emotional affects on these lovers and those around them, didn’t just bring me to tears, but actually made me nauseated, as I couldn’t help but imagine what it would be like to watch one of my loved ones disappear in front of me without being able to do anything about it. 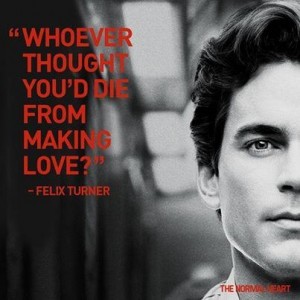 Doomed love story aside, this film is about the triumph of the human spirit and the determination, preservation and dedication of people like Ned Weeks who eventually helped make the HIV/AIDS crisis a top national priority, resulting in better education and medical care for all sufferers of the disease, gender and sexuality aside. These first LGBT activists also paved the way for the modern rights we have today. Watching a cast interview, I discovered that DOMA was overturned while they were busy filming! A sign from the universe indeed, and a remarkable victory for those like Larry Kramer and numerous other QUILTBAG heroes, who have fought so long and so hard for the most basic of human rights: equality.

If I have any criticisms of this film it’s that I could’ve done with a bit less politicking and a lot more emphasis on the development of Ned and Felix’s relationship. I know that wasn’t the point or focus of the story, but things seemed to progress quickly and largely off-screen when I really wanted to see their love grow and witness more of how it affected these characters in the midst of the health crisis. That, or I just really wanted to see more of Ned and Felix’s romance before Felix gets sick because I’m a sucker for a love story… and Matt Bomer. 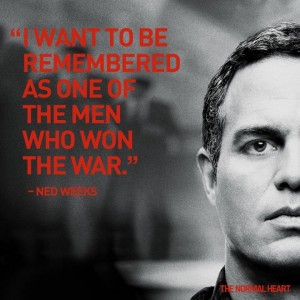 I couldn’t sleep after watching this film and I haven’t been able to get this movie off my mind for more than week, often going back to rewatch significant scenes to remind myself that what these men were fighting for then isn’t all that different from what we are fighting for now, except the conversation has broadened from strictly gay and lesbian to include trans, queer, intersex and a myriad other gender identities. The argument, however, hasn’t changed very much in almost 35 years – that people are people regardless of gender identity or sexuality, and that we all deserve human rights. Just writing that makes me extremely angry, because to deny LGBT+ people any of those rights means to treat them as less than human and that is something I just cannot fathom.

Suffice it to say, I am so glad this play was made into a film otherwise I might never have known it existed. As hard as this film is to watch, I strongly recommend it. There is nothing glamorous about The Normal Heart, but it is extremely brave and honest, which is why I will be taking shares out in Kleenex and rewatching this film again and again, because its message is an important one and until we have true equality for all human beings, the fight will continue. Inspired by this film, I plan and hope I can make my own contribution in the fight for equality in whatever capacity I can manage.

Have you seen The Normal Heart? What did you think?