Angels of the Knights Blog Tour

The hallowed world of Emperica is everything she had ever hoped for as a mortal—immeasurable beauty, unconditional love and light. But, with affection for humankind still burning within her, she joins the Knight Caste to train as an angel warrior. As a Knight, she will give up her wings and return to the place that killed her to use her unique powers to search out and destroy the evil Kjin that roam the earth. As a Knight, she will stop at nothing to protect the mortals in her care.

The elders warn her that the path she chose will be a solitary one. That she will not have the same bond with humans as she once did. But, as far as she knows, the elders had never met Kade Royce.

When her duties place her in the path of this handsome former cop, emotions buried long ago rise to the surface and she is powerless to ignore the depth of her feelings for this young man. She knows instinctively that she has found what most people search their entire lives for.

Ignoring the risks, she invites him into her world of danger, but soon their lives collide with explosive consequence. As a result, Fallon realizes with heartbreaking despair that she can no longer hide from the painful truth. In order for Kade to live, she must destroy him. 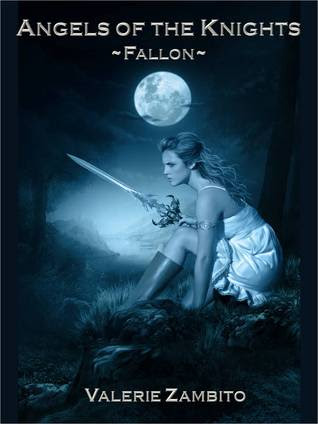 An interview with the author, Valeria Zambito…

I am very lucky Mom of three teenage sons and the wife of a New York police officer. After a busy sales career at a Fortune 500 company for over fifteen years, I am now fortunate to be able to write full time. In my spare time, I like to…write. Yeah, I’m obsessed. Occasionally, I’ll step out to feed the kids or share a glass of wine with a friend, but mostly I’m engrossed in a fictional universe or two.

In my opinion, there’s nothing like it. Fantasy grants us entry into a world beyond our own that is filled with adventure, mystery and danger. We get to enjoy a front row seat to human struggles of epic proportions. Struggles that tug at our heartstrings and elicit real emotion.

One evening last spring, I had this idea for an angelic teen hero. As a writer of adult epic fantasy, it was a complete 180 for me to turn to teen paranormal fantasy, but I now had this new character consuming my thoughts, and the mental image of Fallon and her back story were very compelling to me. I just had to get to know her better.

At that point, I shelved all of my other WsIP and released Fallon three months later.

It’s not only a sweet, teenage romance, but an inspirational tale of the after life.

The amazing Elena Dudina (www.elenadudina.com) created the original covers and, earlier this year, I found a great new graphic artist who gave the books a facelift with a new accent color and fonts.

Sure! I’m almost finished with Book Four in the Island Shifters series. After that, I’ll be working on a book called Eden’s Creatures. It’s contemporary fantasy, but not sure if it will be YA, New Adult or Adult yet. Depends on how the story fleshes out. Projected release date November, 2014.

Next, I will start on a historical romance tentatively called Feral Princess that will feature a young character from the Island Shifters series. Projected release date April, 2015.

I love this question! My husband would definitely be my survival buddy. He’s a police officer (where do you think I came up with Kade?). This man would love to help me kick some demon ass.

2. Bad boy or good boy love interest? I write heroic fantasy, so I love the hero. Can’t he be a bad-boy and a hero?

3. YA or Adult books? Adult

4. Reading a good book or writing one of your own? Writing

5. Angels or demons? Angels, of course.

This entry was posted in Blog, Reading and tagged books, giveaway, paranormal, reading, YA. Bookmark the permalink.