Thirty years ago, there was the Collapse. A massive war fought with biological weapons and followed by plague. Almost everyone died.

Ten years ago, the aliens showed up. They made one of our cities their own and that’s where they stay, for the most part anyway.

One year ago, I killed two men and went a little crazy.

Today, the aliens took my brother and I will do whatever it takes to get him back even if it means partnering up with the enemy, an alien boy who makes me think things I shouldn’t and makes me feel things I don’t understand. 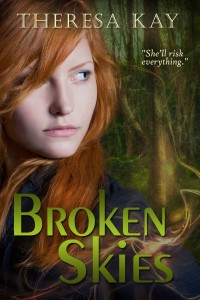 I drop to the floor at the sound of the knock. My breath hisses in through my teeth when I smack an elbow against the table on my way down. What is Emily doing here? She has to know that Jace went out with the hunting party this morning. Nosy sheep girl. I cradle my elbow and scurry across the floor, conscious to stay below the level of the windows. I’ve got my long, red hair pulled into a messy braid and I’m wearing my brother’s clothes— not exactly acceptable attire around here for a girl and not easy to hide. If she sees me like this it will completely ruin my day.

“Jasmine?” Emily’s voice calls from outside. Not after my brother then. She’s after me. I slide along the wall until I reach my bedroom and pull an over sized dress out of my closet, sliding it over my head and smoothing it down. She calls my name again and I roll my eyes.

“Jax,” I mutter to myself. “My name is Jax.” My fingers twist my braid into a loose bun and I secure it with two pins from my dresser before I finally answer the door, a smile plastered on my face.

Emily startles and takes a step back, but her smile never falters. “Good morning, Jasmine. I was wondering if you’d like—”

“Jax,” I say. “And my brother’s not here.” Her brown eyes flick down to my folded arms and she sighs, shaking her head slightly.

“I’m not looking for your brother…Jax. I was looking for you. I was hoping you’d join us for the sewing circle today. There are quite a few things I’d like to discuss with you.”

I barely manage to conceal my snort. Emily flinches. I guess I didn’t manage to conceal my expression. “Um…I can’t. I have to take this…” My eyes travel around the room, darting from one item to the next. I grab a small knife sitting on the table, “…knife to Jace. He’s out hunting and it’s his favorite.”

She has to know I’m lying, because I’m sure she’s fully aware that I’m not allowed outside the gates without an escort, but she’s too nice to call me on it.

“Well you’re welcome anytime,” says Emily, still smiling. She brushes a few strands of dark brown hair, escapees from her super tight bun, behind her ear. “We’d very much like to get to know you.”

I smile and nod at her. What am I supposed to say to that? No thanks I’d rather pull my fingernails off than sit around and chat about being Promised while sewing a dress I have no intention of wearing? They don’t need to get to know me. I’m not going to be around long enough to make a life here.

“Sounds great,” says Emily. Her hand lands on my shoulder before I can move away. She drops it almost the same second it touches me but I have to close my eyes to keep my breath under control. In. Out. One. Two. When I open my eyes again, her face is twisted with concern.

“No biggie,” I force my shoulders to shrug. “Just… I’ll see you later, okay?”

Her smile returns, weaker now, but still warm. “Sure.” When she turns and walks back down the path, I let out a sigh and rest my back against the door, willing my muscles to relax again.

Five minutes later, after ditching the dress, pulling on my boots, and wrapping a large cloak around myself, I’m out the door. It’s only a few blocks to the East gate and I’ve gotten pretty good at small smiles and jaunty waves, but there’s still quite a bit of civilization I have to make it through and always the risk of getting caught. I’ve been caught before and still avoided punishment. You’d be surprised how well the mentally unstable card plays around here in getting me out of things. Of course, my brother is the best hunter in town and he’s also best friends with the son of our ‘illustrious’ leader so that might have something to do with it too.

Better not to get discovered sneaking out though, I’d prefer to avoid the scrutiny. People already look at me funny, no need to add to their opinions of me. They say I’m unsociable, but mostly I just have nothing in common with the girls, sitting around and being obedient, just waiting to be Promised and start popping out kids, and I have even less in common with the boys who grew up under Dane’s watchful eye and think I’m less just because I’m female. No matter what I do, I’ll never fit in here. And thank goodness for that. I would never

want to be one of those silly sheep girls that inhabit this place. Dresses, buns, silence and subservience. That’s what’s expected from the females around here. I have a little wiggle room as I’ve still got two months until I hit eighteen. I guess I’m supposed to suddenly turn docile and compliant when it’s time for me to be Promised, but that’s not going to happen. I don’t plan to be Promised at all, 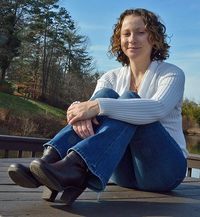 The only person she knows who had a subscription to Writer’s Digest at eleven and was always excited to write research papers, Theresa has been putting words to paper since a young age. She writes predominantly in the sci-fi and urban fantasy genres. Residing in central Virginia, she juggles two kids, a husband and a full-time job in addition to her writing and in her free time she reads almost anything she can get her hands on.