Mason’s diabolical plan had actually worked. In a matter of minutes he had kidnapped me, stripping me of everything…money, family, and freedom. It was humbling, depressing, and damn infuriating but I refuse to go down without a fight. I refuse to be defeated.

Boulder will find me. I didn’t know how, but I felt it deep in my soul.

Could he accept me without judging?

That’s where most men failed. Accepting the real me. But after years of hardening my heart, and sealing it behind a steel cage, I was ready to give myself to him freely. Knowing, that he planned to take everything I offered with both hands, until all I thought of…and wanted…was him… 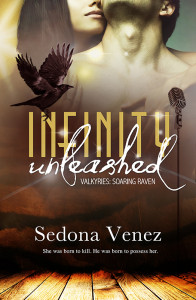 He laced his fingers with hers, his lightly tanned skinned contrasting beautifully with her glowing mocha skin. ?

“From the minute we met, I knew you were different.” His voice was a mixture of lust and triumph. His mouth was on her instantly, demanding entry. She opened them with a breathy sigh, twining her arms around his neck. He nipped her bottom lip before pulling back. His green eyes flashed with emotion. “I need you by my side.” Leaning forward, he licked her bottom lip slowly before nipping it. “As my mate and eventually as the mother of my children.”

Arching a brow, she asked, “Are you going to kill Alik and Mason?”

“Darlin’, that’s a given.” He grabbed her chin gently. “Understand this. I don’t take the preciousness of life lightly, but if it’s a choice between your life and theirs… I’d choose you every time.” His canines dropped with a feral glint in his eyes. “Besides, you and I know they have it coming at the dull end of a rusty knife,” he stated icily.

Her arms tightened around his neck as she looked deeply into his eyes. Boulder kissed her lips.

He smelled the fear all over her. He wanted to give her words of comfort, but they would be meaningless in the days to come. There were hard times ahead for both of them. His mind rebelled at the secrecy he was bound to, but he knew that revealing it would only have disastrous results. Her fear would eventually pass and somehow she would dealwith the heartbreaking loss… no matter how temporary. Her resilience would cement their bond in the end. This was her burden to bear. Her test to pass or fail.

He buried his nose into her neck. “Your smell is intoxicating,” he muttered. His nose lingered along her pulse as his hands pinned her arms above her head. His lips touched her ears. “I need you.” His voice became hard, demanding, showing her he was in charge.

Sedona Venez is the author of the New Adult Credence Curse series, and the New Adult Valkyries: Soaring Raven series. She is a NYC girl (go Brooklyn!) with a slight obsession with her iPad, Pinterest, and television shows Pawn Stars and Face Off. Her love of music, tattoos, rockers, alpha men and wolf-shifters inspires her edgy paranormal romance novels. She also writes Middle Grade/Young Adult under her real name, T.L. Clarke.