Tearing the Shroud by J.M. Bray

Today I’d like to welcome J.M. Bray to Off the Page, sharing a scene from his new book Tearing the Shroud.

Fall in love, be possessed, hunt a sorcerer and save the world — and Vincent thought calculus was tough.

1984 — Vincent expected college to be about freedom and girls, but then the nightmares of sorcery, monsters and other worlds began. Not even the surprising attention from his dream girl, Julie, could shake them.

Before he’s even nailed his second date with Julie, he’s possessed by Coleman, a warrior from another realm. Coleman is hell bent on defeating the monstrous Kafla who threatens to tear into Vincent’s reality, changing both his and Coleman’s worlds forever. They have one chance to stop them: Vincent must allow Coleman to share his body and wage war against the sorcerer.

Now it’s up to them, the women they love, and Vincent’s rag-tag bunch of role- playing and gaming friends to save the world, or see 1984 descend into the apocalypse.

Sitting on the edge of the lumpy mattress, he clicked the remote. The TV popped on. It was the best part of the cheap hotel room. Why do you click a remote? Nothing clicks on it. He scratched his head, surely there was a memory floating around that had the answer. But he wasn’t finding it. On the screen, the blathering heads were spitting out their drivel again. Of course, it’s always a sunny day in the southland. He headed to the bathroom. ‘At least the facilities here are inside, and I love these lights,’ he said, flipping the switch up.

He stared at his face in the mirror as he relieved himself. The florescent light gave his complexion a corpse-like look. Corpse-like. The thought made him chuckle as he zipped his pants. The TV droned on, ‘Up next. Violent crimes are on the rise locally.’ A woman’s voice picked up at the man’s pause. ‘Is it gang related, or the brutal work of a single individual?’

He leaned into the mirror for a closer look. ‘Shave, or not shave? What do you think, Bill?’ Bill wasn’t being very talkative. He glanced at the bathtub, where Bill had spent the night, or at least the last few hours of it. He lay there in his t-shirt and boxers, his head off to one side, neck bent unnaturally. An apron of thickened blood covered his chest from the cut across his throat, which had nearly decapitated him. A red mural of San Diego harbor decorated the wall next to the tub. In it, medieval buildings replaced the modern architecture. Looking at the painting, he tilted his head and rubbed his chin. He plucked a brush off the counter, dabbed it against Bill’s chest and added a flag, to the top of a tower. At the lower right hand corner, he wrote Callendel. ‘There, that’s what was missing. Bill, any thoughts?’

That’s the problem with the dead. They’re usually such poor conversationalists. ‘I suppose a shave will go better with my new suit. Thank you for that, by the way.’ He nodded at Bill. ‘Oh, and the credit cards, Rolex, Cadillac, cash, and, well everything. You certainly gave your all.’ He peered at first one side of his face then the other. ‘It’s a shame that convincing you took such a difficult turn.’ Bending down, he retrieved the ball gag from the floor where he had dropped it earlier, kicking the pieces of Bill’s amputated fingers to the side. He sighed. ‘It could have been so much easier.’

The rich…they so often confuse affluence with power. He picked up the sleek hunting knife and shook the tip toward the bathtub, while still examining himself in the mirror. ‘A lesson learned, Bill, a lesson learned.’

He lathered his face with soap and shaved quickly, the knife gliding across his skin, never cutting anything but whiskers. ‘Ah, a good shave, glad we went that way. Don’t you think, Bill?’ After rinsing his face, he washed in the sink then walked back into the dingy room. As he passed the TV, the blonde woman calmly described a home invasion in University Heights that left a wealthy couple dead.

‘Their mutilated corpses were discovered this morning by the gardener, where they had been posed reclining in chaise lounges by the pool.’ She spoke with a serious demeanor that never reached her eyes, her overly white teeth flashing.

Singing tunelessly, ‘Busy, busy, busy,’ he put on his new suit. He’d chosen well; it was a perfect fit. ‘I told you we were the same size,’ he called to the bathroom. The shoes were another matter; they were much too small. First stop today will be shopping. He put the money clip stuffed with hundred dollar bills into his pants pocket. A folded knife went in one breast pocket and the calfskin wallet in the other. One last look in the mirror. He looked, smiling. ‘Hi, I’m Bill, Bill Wilson.’ He slipped the sheathed hunting knife into his newly acquired briefcase.

‘Well, I’m off, Bill. Thanks again.’ He waved as he walked toward the door. ‘Oh my, I nearly forgot.’ Taking the wallet out, he looked at the driver’s license. A much livelier Bill smiled up at him. ‘This won’t do,’ he said running his thumb over the photo. As it passed, the picture transformed. His face now occupied the ID. ‘There we are.’ He stepped out and closed the door behind him.

She was right, another sunny day in the southland. 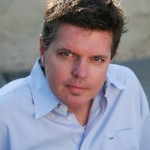 J.M. Bray lives in Southern California with his college sweetheart and their two dogs. After a lifetime together, they are happier than the moment they met.

When not writing or working his “day job”, he loves to cook, play the guitar, and travel with his wife. Every chance he gets, he races an old Porsche named “Tuffy” at tracks in the southwest.

This entry was posted in Blog, Reading and tagged fantasy, new adult, romance. Bookmark the permalink.