Thank you, Suzanne, for hosting me on your blog today!

Hello all, I’m CJane Elliott and my novel Serpentine Walls was released by Dreamspinner Press on October 30th. 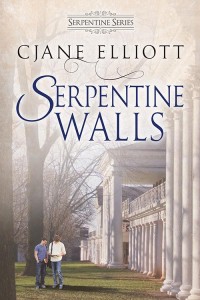 Reeling from the news that his parents are divorcing, Pete Morgan starts his junior year at college cynical about love and commitment. Although his new openness to one-night stands does wonders for his sex life, fighting his romantic nature proves harder than he’d anticipated. He soon finds himself pining for a glamorous senior, Aidan, who doesn’t mind taking Pete to bed but shows no interest in commitment—at least not with Pete. And Pete’s attempt at a “friends-with-benefits” relationship with sophomore Jed leaves Pete feeling empty.

One bright spot in Pete’s year is Matthew, an easygoing graduate student who assists Pete in making his first film. Matthew has some baggage too, and has sworn off relationships and sex altogether, so Pete feels safe to enjoy their friendship. But he falls for Matthew anyway, not able to fight his growing conviction that Matthew is the perfect guy for him. Even if Pete can accept that he made a mistake when he turned his back on relationships, that doesn’t mean Matthew will feel the same. With a few life lessons under his belt, Pete’s ready to take a chance on love. As he finds the courage to bare his heart to Matthew, he can only hope that Matthew will take a chance with him.

Serpentine Walls is a contemporary novel set at the University of Virginia. Most of the characters are in their early twenties, trying to figure out where they’re going and what life means to them.

My main character, Pete, is a typical college guy and at the beginning of the story he comes off as somewhat shallow. Angry over his parents’ divorce, he insists he wants nothing to do with love and relationships. He keeps a nice guy, Jed, in the friends-with-benefits category and meanwhile pines after unavailable Aidan with whom he has a hook-up early in the story. He winds up falling for wonderful Matthew, who has sworn off relationships himself, and they both have to give up their fear to find their happy ending.

One aspect of Serpentine Walls that I enjoyed writing is the group of friends that Pete is a part of and how they help each other figure things out. Pete’s roommate is Angie, a friend from high school, who goes through her own romantic ups and downs in the story. John has been Pete’s best friend since third grade and Brian is the guy who’s crushed on Angie ever since high school.

The following excerpt takes place after they’ve been at school for a few months. Pete has started his “friends with benefits” arrangement with Jed although he still pines for Aidan with whom nothing more has happened since their one-night stand. Matthew is a new friend but Pete hasn’t fallen for him yet.

Excerpt – please note, this is an NA book and content might not be suitable for younger readers.

Jogging down the sidewalk, Pete let the rhythmic pounding lull him into a meditative state. The wind kicked up, and a fragment of a dream he’d had the night before drifted into his mind.

He’s outside his house, but he’s lost his key and can’t get in. Now he’s inside, standing in the foyer. All of the furniture is unfamiliar. Adults in black mourning clothes are in the hallway, and they say, “We’re sorry for your loss.” His eyes fill with tears and he keeps groping in his pocket for the key, but it’s not there.

Pete wiped the sweat from his forehead. Freud could do something with that. No, Jung. John was forever spouting Jungian theory. He’d have to tell him this one—John loved to analyze his dreams.

I’ve got an analysis. Life sucks. Nothing lasts. People are shitheads and leave you in the end. Like Dad.

Pete breathed more deeply, anger tightening his throat. The asshole had had the nerve to bring his new girlfriend, Mallory, with him when he came to visit Pete at school last week. Mallory. Of course she’d have a name like that. It reminded him of a mallard, only she didn’t look like a duck. She looked like the thirty-year-old bookkeeper she was. CPA, she was quick to correct people, smiling and tossing back her (fake) red hair.

He slowed to a walk as he neared the apartment, disgusted that he had wasted his endorphins on family crap. Feeling his phone vibrate, he pulled it out and frowned. It was Rob, his least favorite brother.

“What?” he said, opening the door and sniffing the air appreciatively. Angie was in the kitchen, stirring onions in a frying pan with a wooden spoon.

“Dad’s been trying to reach you.” Rob sounded like his usual sanctimonious self.

“So call him back so he stops bugging me about it.”

“He can fuck himself.”

“Great. I’ll tell him you said that.”

Angie looked over from the stove. “Who was that? And who needs to fuck himself?”

“Oh.” Angie shot him a sympathetic glance. “So… is your dad… I mean, he’s still with that other woman?”

“Yeah. They’re planning to go to Puerto Vallarta for Thanksgiving.”

“That sucks. How’s your mom doing?”

“Shitty.” He was tired of thinking about it. “What are you cooking?” he asked, to change the subject. “Smells good.”

“I thought we were going out to eat.” He clasped his hands over his head, stretching to one side and then the other.

“Change of plans. Brian’s coming over so we can study for the history test.”

“You should give him a chance, Angie. He’s a good guy and he’s nuts about you.”

“Here we go again. I could say the same about Jed, you know.”

Pete walked past Angie to open the refrigerator. “Coronas? Fancy.”

“Don’t drink ’em all. Save one for Brian. Hey, why don’t you invite Jed over since I’m actually cooking for once?”

Pete got himself a glass of water. “I’m not all that into Jed. I don’t want him getting ideas.”

He and Jed had gotten together a few more times, hanging out in Jed’s dorm room, eating snacks, playing video games, and capping things off with some not-too-exciting sex. But that didn’t mean he wanted a “relationship” with the guy.

“You talk about me giving Brian a chance; you should give Jed a chance.”

Angie frowned. “Well, what’s wrong with that? I believe in love.”

“Nothing’s wrong with it for you. Just not what I’m looking for. Jed and I are hooking up. That’s all it is.”

“Hooking up? Ugh. I hate that expression. Can’t you at least call it dating?”

Angie huffed out a sigh. “Fine. All I’m saying is you and Jed could be more.”

“But that’s my point! You and George were boyfriends—you were each other’s first kiss and first everything else.”

Pete drank his water, thinking about George. “Were we even boyfriends? We never talked to each other at school ’cause we didn’t want anyone to find out. All we did was have sex in George’s basement. I mean, no one but you and John even knew we were together.”

Angie picked up a knife and started chopping a green pepper. “That’s ’cause y’all weren’t out at school, not that I blame you, given the jerks at our high school. It’s different now, though.”

“I know. I just mean that… beyond the sex, we never really connected. And it didn’t last once we graduated.”

“Well, that’s what going to different universities does to you. You and Jed are right here in the same place, and you have time to build on things.” Pete made a noncommittal noise, watching Angie slice the pepper with quick, sure movements. Finally, she set down the knife and turned to him. “I guess I don’t know what you want. You say you’re not looking for anything beyond a hookup, but then you moan about you and George never really connecting.”

“Yeah.” Pete dropped his eyes to study the water in his glass. “I guess I don’t know what I want either.”

No sooner did he say that, though, then the answer appeared: Someone who’s into the same things I’m into—books and movies and music. Someone fun. Someone I can talk to about everything. Someone where the sex is through the roof. Someone like Aidan. Fuck me. Dream on.

What did you think of the excerpt?

If you enjoyed that and want to read more, you can connect with the author in the following ways: