This week I’ve got something extra special in store. One of the best books I read this year is a YA dystopian novel featuring a male bisexual protagonist. This novel blew my mind and I have been somewhat of a fangirl ever since. Today, I am delighted, thrilled and honoured to welcome the author of said book to Off the Page sharing some insights into her character.

The book I’m talking about is CODA by Emma Trevayne and today’s hero is the main character Anthem. 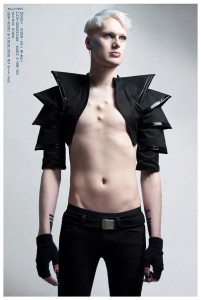 So why is Anthem a hero? Anthem is a hero to me because he doesn’t come from much, he doesn’t have any super powers and the odds are pretty much never going to be in his favour. Despite all this, Anthem still takes on the large and powerful forces arrayed against him to protect and better the lives of the people he loves. He is self-sacrificing and willing to do whatever it takes to make the world a better place. He’s no angel either and I love that he’s conflicted and complicated. He is certainly an inspiration, fighting for what he believes in for those he loves against an all powerful foe.

That’s why I love Anthem and why he makes this list as a fictional QUILTBAG hero. Author of CODA, Emma Trevayne, was kind enough to answer a few questions for me…

First, empathy. A hero who doesn’t see how other people are affected by given circumstances isn’t a hero, they’re just someone looking for glory, and to an extent, you have to understand where your enemy is coming from in order to defeat them. Also bravery, of course, even if it’s bravery that grows from having no other choice (or feeling that there is no other choice). Humor doesn’t hurt.

2. Do you think Anthem would consider himself a hero? Why?

I don’t think Anthem considers himself a hero, but then, I think very few true heroes do see themselves that way. Anthem saw a task set out in front of him that would make the world better for those he loved, and he went for it because nobody else was stepping up, and maybe nobody else could have. But at no point was he thinking how amazing he was for doing it. Given the choice between talking about how heroic he is and talking about absolutely anything else, Anthem would go for the “anything else” every time.

3. Anthem is bisexual – did you deliberately choose to include an LGBTQ character in your story?

Not exactly, but I deliberately chose not to fight Anthem on the issue of his sexuality. He was very clear with me, from a very early stage in the process, about who he was. Within a few minutes of his first character appearance in my head I knew all of his traits, including that one. At that point, I had to decide whether I wanted to make him straight even though it wasn’t who he said he was. Obviously, I didn’t change him, because denying someone – even a figment of my imagination – their chosen sexual orientation goes against everything I believe in and stand for on this issue.

4. How have readers reacted to a bi MC? Do you think reader reception would be different were Anthem a stereotypical, straight, alpha hero?

The reaction to a bi MC has been overwhelmingly positive; I actually haven’t had any readers tell me they put down the book when they discovered that aspect of the story, or that they were disappointed/annoyed/horrified, which gives me faith in the world. I think there need to be more books displaying LGBTQ characters tackling situations unrelated to who they sleep with. Yes, those struggles are an unfortunate and frighteningly common part of our society, and books should be written about them, but they do not encompass the entire range of LGBTQ experience. Lots of people, lots of teenagers, don’t struggle at all. They need representation in books, too.

As for whether reader reception would have been different if Anthem had been a more stereotypical, straight hero, it’s hard to say. Probably, yes, but they would have been reacting to a different book. Making the decision to stay true to who Anthem was kind of unlocked a lot of mental doors for me during the writing process. I was already breaking one of the rules, so it made it easier to break others. Had I made him straight and therefore decided to stay within some slightly more mainstream confines, that would have had ripple effects across the rest of the characters and story. I would already have been in a mindset where I wasn’t taking risks, if that makes sense. It might have made the book more popular, but I’m not sure I would have been as proud of it.

5. CODA is all about music. If you had to choose just one song that personified Anthem, what would it be and why?

Well, there are lots of songs on the CODA playlist that represent who he is at various stages of the story, but you said just one, so I’ll have to go with the one he’s named after: Leonard Cohen’s Anthem. The whole song is just incredibly appropriate to my Anthem, a song about how perfection is too much to hope for, and in fact isn’t always what you want. You can do what you can, what you have to in this moment, and it’s good enough, the right thing. I went to great lengths to make Anthem not perfect. He messes up, he gets things totally wrong, he hurts people and lets himself get hurt, but he’s human, and it all ends up okay.

“Ring the bells that still can ring/forget your perfect offering/there is a crack, a crack in everything/that’s how the light gets in.”

I’d like to think that by the end of the book, the light has gotten in.

Thank you so much for the awesome questions and having me on your blog, Suzanne! – You are most welcome! Thank you!

What do you think of Anthem? Who is your hero? 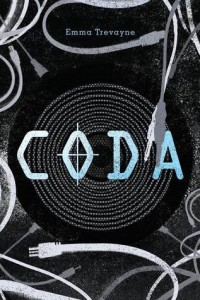 Ever since he was a young boy, music has coursed through the veins of eighteen-year-old Anthem—the Corp has certainly seen to that. By encoding music with addictive and mind-altering elements, the Corp holds control over all citizens, particularly conduits like Anthem, whose life energy feeds the main power in the Grid.

Anthem finds hope and comfort in the twin siblings he cares for, even as he watches the life drain slowly and painfully from his father. Escape is found in his underground rock band, where music sounds free, clear, and unencoded deep in an abandoned basement. But when a band member dies suspiciously from a tracking overdose, Anthem knows that his time has suddenly become limited. Revolution all but sings in the air, and Anthem cannot help but answer the call with the chords of choice and free will. But will the girl he loves help or hinder him?