“I used Grammarly to grammar check this post, because my allergy to commas is legend.”

While working on the revisions of my soon to be on submission YA science fiction novel, I had a revelation of sorts and it’s all thanks to Dean Winchester.

Part of being a fangirl to me means getting to know the actors behind the characters, which means I spend as much time watching behind-the-scenes footage and convention interviews as I do watching actual episodes of the series; the series in question being Supernatural.

I think I may almost enjoy watching interviews with Jensen Ackles more than I do watching Dean Winchester gank monsters… almost. I recently started watching Supernatual again, and of course I ended up on Youtube watching hours worth of convention interviews, which brings me back to the revisions of my own story.

My novel is in dual narrative, meaning I switch between male and female POV chapters. One of the biggest problems for me was really getting into the character, of making their emotions feel real on the page and not just reported or told. This is the big show vs tell rule and I was seriously struggling with it. Cue Eye of the Tiger and Dean Winchester…

I watched a handful of convention interviews with Jensen Ackles and he received quite a few questions about his acting method, specifically, how he gets into character and how he separates his real personality from Dean’s. Ackles is nothing if not articulate, and his answers were informative and inspiring. Ackles is not a method actor – he doesn’t become Dean Winchester and immerse himself in the character for the duration of filming like some actors eg. Charlie Hunnam on recent seasons of Sons of Anarchy, or Anthony Hopkins with just about everything. Watching behind and the scenes and gag reels prove it. Ackles manages to slip in and out of character at the flip of a switch, which he has demonstrated during interviews. How does he so effortlessly become someone else? I knew it was a skill that could drastically improve my writing.

One of the things he said that really stuck with me is that he focuses on what he has in common with his character and builds on that. Duh, obviously, but it’s something so easy to forget, especially when I’m writing about robots in a post-apocalyptic future. But that doesn’t matter because my characters have human emotion, they feel, and even if why they feel what they’re feeling isn’t something I can relate to – having never been a run-away android fighting for my rights – I can still relate to fear, to anger, to love and regret and channel my own experiences through my characters.

Ackles also spends a lot of time in preparation, reading the script, making notes, understanding why the character says and does what he does instead of just memorising the lines. He’s even been known to rewrite scenes and ad lib when what the script said just didn’t jell with what Dean Winchester would do. Inspired by Ackles, I started reading up about the various types of acting and decided to take a different approach to my novel.

2. I became my characters. For the day, I was my character. I wore something that made me feel more like the character, played the kind of music they’d listen to, tried to speak they way they did – of course, only my dog was at home so he didn’t mind my sudden personality shift.

3. Once I was immersed in that character, I read through the entire novel, but only the chapters written from that specific character’s POV, tweaking, editing and revising as required. The next day I did the same thing for my other POV character.

This proved amazingly effective! I learnt so much and ended up changing entire scenes, even changing the order of events to make the novel’s progression more natural and realistic to my character. This is definitely something I am now going to do, not just during revisions, but while drafting as well. Of course it’s not always so easy since I tend to snatch writing time where I can and don’t always have time to get into character (it took me about an hour the first day to really start feeling like my character) but it’s a new skill I have in my writerly arsenal and I am so grateful for it. I’m now considering taking some acting classes to help me develop these skills, if I could just find the time… and classes in English here.

So thank you Dean Winchester! 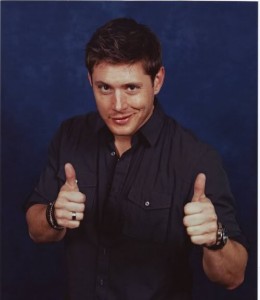 Do you think acting skills apply to writers? Who has inspired you recently?