5 Ways to Respond to Anti-Gay Rhetoric on the Streets

In continued celebration of LGBT Pride month, today I’m hosting an article provided by Alyssa Miller from San Diego, about the importance of equality and how to respond to anti-gay rhetoric.

5 Ways to Respond to Anti-Gay Rhetoric on the Streets

As the discussion surrounding gay rights gets louder, the loudest representatives on opposite sides of the spectrum get the most airtime. At times, it appears we’re on the verge of another civil war. 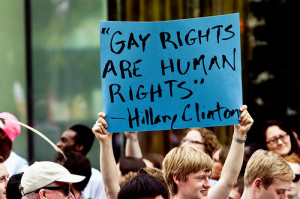 When we compare cable TV rhetoric to most of the actual conversation in bars, coffee shops and restaurants, we have reason for optimism about the chance for civil discussion. Still, some on both sides of the debate feel harsh words and loud screams are the best way to discuss our differences. Rather than joining the vitriol, gay advocates can set an example and approach hurtful opponents with respect.

There’s much to be said about Fred Phelps of GodHatesFags.com and his God hates bigots brood. The logic is often difficult to follow as they stage anti-gay demonstrations — over 50,000 — at the Emmy Awards, celebrity funerals and most sadly, the memorials of soldiers killed in Iraq and Afghanistan. Although despicable to most, Phelps’ clan have been upheld as free speech by the U.S. Supreme Court as recently as 2011, citing an article from CNN.com. Protesters who’ve organized to attest against Westboro Baptist Church have often led to chaos, violence and sheer stupidity. Recently, anti-Westboro demonstrators have begun to stage silent protests at the military funerals. Holding American flags, these non-vocal protesters formed a protective wall between the Westboro congregation and bereaved families. Not only did their behavior help underscore the shrill unreasonable chants of the anti-gay protesters, but their physical presence allows police to protect the families and silent protesters.

The Chick-fil-A Nonsense and the Conservative Chicken Fryers

Do you remember the guy who made fried chicken but also hated gay folks? Yes, we’re talking about Chick-fil-A president Dan Cathy, who Time confirmed was ranked fourth as the “Top 10 Everything of 2012” scandals, who started a national controversy, or a nationwide Internet session.

Subsequent investigations by journalists revealed that significant portions of the company’s profits were used as donations to pro-family and anti-gay groups. This information and an appropriate response to it was lost in the debacle of LGBT’s meaningless and utterly unproductive Same-Sex Kiss Day demonstration. Not only did it fail to accomplish any goal or open a dialogue, it fed into the bias of the pro-family groups.

The History of Anti-Gay Activity and Gay Pride

Face-to-face, calm and forthright communication with someone with whom you disagree about an issue can be an eye-opening experience for you both. Agreeing to disagree, seek to explain your position(s) and vice versa. Agreement isn’t the goal — communication is.

How do you respond to anti-gay rhetoric?