Would you survive the Arena?

Today I’m pleased to welcome L. W. Patricks to Off the Page chatting about his new book Shadow of Wrath. 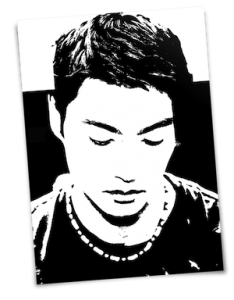 L.W. Patricks is the author of SHADOW OF WRATH and the literary architect behind the upcoming Sins of the 7 series with his second book: AWAKE THE GHOSTS to be published late 2013.

His short fiction works has been published by Crow Toes Quarterly Magazine, Fiction and Verse literary magazine, and upcoming Denizens of the Dark. He enjoys writing contemporary fantasy with an emphasis on creating urban mythology for his stories.

Though he calls Toronto his home, L.W. Patricks has a passion for exploration and has travelled all over the world including Germany, Netherlands, Italy, France, Spain, Czech Republic, Austria, United Kingdom, Thailand, Hong Kong, Cambodia just to name a few. His diverse experience amongst other cultures provides inspiration for his stories.

He currently lives in Toronto with his wife where he enjoys the scorching summer days and the icy winter nights while masquerading as a Word Samurai. He claims to be the offspring of a typewriting chimp and a literary ninja.

1. Tell us a little bit about yourself?

Lately I’ve been telling everyone some half baked story of how I’m the spawn of a typewriting chimp and a literary ninja while eating the soul of Unicorns to sustain my crazy imagination.

Here’s the truth though: Ever since I opened that book of Fairy Tales when I was a kid, I loved reading and I spent countless hours recreating a parallel universe where Red Riding Hood kung-fu kicked the wolf in the jugular and Snow White discovered a spell to merge all the dwarves together to form a Super-Dwarf that tossed the evil step-mother into the sun.

With my love for reading and writing, I took it to the next level and published a book. Sadly no super human fairy tale characters (but it’s always been on my radar).

2. Which books or authors have influenced your writing?

On that list is definitely George RR Martin. He writes what I love to read, books filled with incredible characters and an engaging storyline that is rich with history and full of surprises.

I’ll also have to mention Hugh Howey. He’s what indie authors should aspire to be in terms of writing technique. He’s a very polished author as well as a complete gentleman.

I’m also heavily influenced by Cormac McCarthy and his unique style. It’s hard to read, full of symbolism, and not for everyone, but his books are so rich and provocative that they always require a second reading. Blood Meridian is one of my favorites.

Finally, there is no greater author in the world than Ernest Hemingway, in my opinion. He’s a master at his craft and can paint such lovely scenes in so little words. I read “the Old Man and the Sea” in a single sitting on a patio while having a couple of beers, and I enjoyed every second of it.

3. What inspired Shadow of Wrath?

I was actually working on another book at the time, Awake the Ghosts, which is a continuation of Shadow of Wrath. I realized I needed to expand the history of the world I was creating in Awake the Ghosts, and it was far too much story to cram into a single book. Thus I wrote Shadow of Wrath as a prelude of sorts. Shadow of Wrath is a complete stand alone book, but for those that want to explore more of this world (and some of the characters), make sure to check out my next book, available late 2013.

4. How did you go about naming your characters?

I always strive to create names that are unique. For the most part, they were names that popped in my head immediately as I started to write. Allegra’s name is influenced by my musical background; Tiberius originates from my love of ancient history; Ryker because my wife was watching a documentary on Ryker’s Island as I was writing; and Dog…well ever since I was a kid, I always used ‘Dog’ as the default name for the video games that needed a player name.

5. What are your thoughts on ebooks? (i.e. love them, hate them, future of publishing, just a phase)

E-books is the future of publishing in my opinion. I love them for several reasons: it’s easier to incorporate social media into ebooks, thus connecting the readers directly to the author, you save paper, and most of all opens the door for all kinds of innovation in the publishing industry — crowdfunding in particular, which I’m a huge fan of. Hopefully Amazon can implement crowdfunding into their business model at some point in the future.

6. Do you read reviews written about your book? If so, how do you deal with negative reviews?

I do and I don’t. For me, I’m truthful to my story, and though it’s not for everyone because of the violence and the shock value, I couldn’t have written the book any other way given the circumstances of the characters. So for those that didn’t enjoy the book because I didn’t follow a particular formula, I can only shrug my shoulders.

However I do cherish all comments from my readers, positive or negative. It’s through reader reviews that I learn about my strengths and weaknesses, and honestly, there’s nothing more important to me than making sure that people get their moneys worth from purchasing my book.

With that being said, luckily I haven’t had any negative reviews….yet =P

7. If you could be any fictional character for a day, who would you be and why?

I’d definitley have to choose the Sandman, from Neil Gaiman’s Vertigo comic series. Can you imagine all the amazing storiess you’d encounter if you were the Lord of Dreams? I’d have enough inspriation for a lifetime. If only I could merge that with the Flash’s super speed so I could pump out a novel every hour. I’d be able to compete with James Patterson for shelfspace at the local bookstore.

Me too! I’d love to be Morpheus for a day.

Definitely coffee; the smell is so intoxicating sometimes. It also takes my creativity to a whole different level; otherwise my books would read like something out of a calculus textbook.

Reading a good book of course! There’s no movie in the world that’s better than the book, in my humble opinion.

Gosh, this is the toughest question yet. When I was a kid, I was a fantasy junkee. Now as an adult, I’m leaning towards science fiction, with the exception of Game of Thrones. But really they go hand-in-hand like peanut butter and banana.

I’m also giving away a FREE ebook of Scifi & Fantasy short stories, one including an emotionally damaged fairy tale involving Snow White. Add yourself to my email list to get a copy!

Don’t hesitate to drop me a line on Facebook, Twitter, or Email. I love writing and I love talking to readers, and nothing makes me more happy than connecting with you. 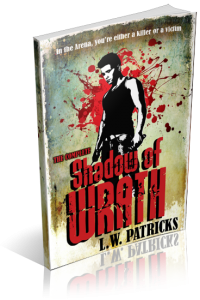 In the Arena, you’re either a killer or a victim.

If survival meant murdering an innocent person in cold blood every week, could you do it? Are you able to stick the knife into your opponent’s heart while they look at you with fear in their eyes? Life in the Arena turns everyone into sinners.

When a starving and homeless boy is kidnapped and brought to a modern-day gladiator arena, hidden deep within the abandoned city of Bimini, he is forced to fight for his life. The crude death matches are a source of enjoyment for Ryker, who resides over the Arena as its vicious master. Given the name Dog, the street boy must find a way to survive, even if it means murdering other innocent kids in combat at the expense of his humanity. With every dead body he leaves behind in the pit, the blood and the violence threatens to wake a beast inside him.

Allegra, a slave girl in the pits and a victim of Ryker’s constant abuse, is his only key to salvation. She has lost everything already — her family, her innocence, and her dignity — while her will to live hangs on by a thin thread. Can she save Dog’s humanity before she too succumbs to the horrors of the Arena? With death casting it’s long shadow over everyone, how can anyone survive?

A tale about survival, tragedy, and human perseverance, SHADOW OF WRATH allows us a glimpse into the world of the Sins of the 7.

This entry was posted in Blog, Interview and tagged dystopian, LW Patricks, Shadow of Wrath, YAlit. Bookmark the permalink.